Wildlife has a ways to go to keep their survival skills sharp.  Here in Florida, all outdoor animals wake up running.  It’s a hard life for most species.  Every critter is someone else’s lunch, and they act like it.  But with just a step or two more up the evolutionary ladder, they’d be on easy street just like the humans.  Or their pets.

Cats and dogs figured it out, incremented their behavior just a wee bit, and look what they get: room, board, major medical.  And belly-rubs.  Here are some suggestions for wildlife that could stand a few behavioral modifications.

Earthworms: Truly unique here, each the very definition of a ‘wiggle worm’.  Dig one up, and they jerk, jiggle, shimmy, squirm, twitch and twist themselves into little fleshy pretzels, and back out again.  Not something any bird, or fisherman, can resist.  Very bad survival tactic.   I recommend they evolve a variant of ‘playing possum’; instead of waggling your goods, little fellas, why not play ‘stick’?  Learn to straighten out like a ruler.  Can’t get put on a hook very easily.  And if so, which fish would bite?

Squirrels: Here, they’ve evolved partial immunity to many poisonous snake bites; okay, pretty cool.  Out in California Rock Squirrels are known to chew up the molted skins of snakes they find discarded, then smear the result on their fur.  Scares off other snakes.  These Left Coast Tree Rats have trumped their Florida cousins in the Evolution Department.  Here, cars are the big problem.  Some bushy-tails here have the odd habit of leaping out onto the roadway just as a vehicle approaches.  Put those acorns down for just a minute, and concentrate on evolving this: at the edge of any road, stop, jerk to attention, then keel over.  Twitch your tail a few times for effect, then go limp.  Any approaching motorist would slam on the binders at the sight of that! 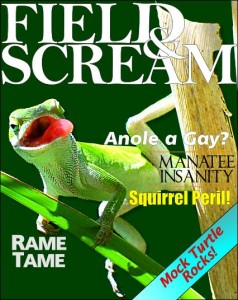 Anoles: commonly if incorrectly known as ‘chameleons’.  These little lizards add a tropical charm to southern living, and are great at keeping the bugs down.  Unfortunately, they suffer at the paws of housecats, who insist on toying unmercifully with the diminutive Geico wannabees, and generally conclude with eating the little guys, if only briefly.  They have no nutritional value to the cat, and wind up being expelled intact, cooked red by the cat’s digestive system.  An obscene repetition for the cat, the anole, and the homeowner.  Solution: the anole evolves a gland that sweats the scent of lime when threatened.  You can change your color at will, why not your taste?  Cats don’t like citrus.  Because of their lime-green coloring, though, the anole has to be careful it doesn’t wind up as a ‘twist’ in the homeowner’s martini.

Gators: They’ve had since the dinosaurs to perfect the patience of Job, but just can’t resist a rotting chicken suspended from a hooked line above the water’s edge.  Observation shows the more mature ones actually recognize the rope, perhaps even intuit what it might mean, and try different techniques to unhook the bait.  Along riverbanks, some will just take it head on, and swim into Cypress roots or ‘knees’ underwater in an effort to cut the line on barnacles.  Dumb idea.  Try this: next time you swim past a dangling, rotten chicken,  hold your breath.  If that doesn’t work, then at least take smaller bites!.  Then again, the American Alligator is wildly successful, even given the astonishing tallies of their annual ‘harvesting’ by man.  Not at all like…

Turtles: Their predicament is perhaps the most wrenching, as they are being ushered out of the world of living species at an alarming, and accelerating rate, and they’re so cute and loveable!  Just doesn’t seem fair, but it’s not like they haven’t had a chance to evolve: two-hundred million years to the gators’ three-hundred.  Is this what 100 million years of missed classes gets you: the inability to distinguish between mankind’s plastic trash and food?  Here’s what to do.  Rather than eat those plastic shopping bags floating at sea, fill them with all the Styrofoam cups, fishing line, balloons and tampon inserters you find floating at sea, and drop it off at the next resort beach you come ashore at.  Fishing line balled up would insert nicely into the toilets of beachside cabanas.  Raft up a bunch of these gift-bags, and coax them towards the inlets of coastal power plants and cruise-ship engine intakes.  Let them bob along without A/C for a while; you want to see garbage start to disappear from the seas?  It’s a start.

Deer: here in Florida, they hunt deer with dogs.  Talk about a stacked deck!  What deer need to learn do is howl…like a wolf.  If you’re ever heard a buck’s breeding bellow, they clearly have the pipes.  With just a few voice lessons, these guys could wail.  That would mess with the dogs’ heads.  The deer might want a few alternate chants, just in case…like the sounds of a vet’s office.  This would require a harmony, a little co-operation between otherwise pre-occupied males and females that time of year.  A little deep-woods screeching Cockatoo, in chorus with a few wailing kittens and puppies, would make any pack of field dogs turn and bolt from what surely they’ll imagine to be a tick-bath ambush.

Manatees: Again, man is the bad guy.  Boat collisions are a big factor in their mortality, and there’s nothing sadder than the sight of one of these behemoths surfacing with the scars of a boat’s propeller cut deep into their hide.  Solution: grab a wakeboard, big fella, and catch some air!  The sight of a 10 foot long manatee high over the wake pulling a gnarly toeside backroll would focus the manners of all boaters on any lake, river, or inlet.