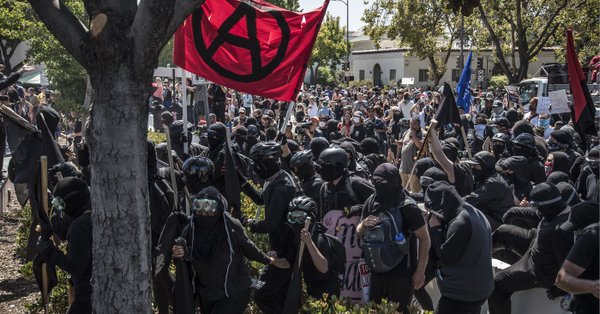 In their zeal to oppose right-wing extremism in the American right, the “anti-facists” or “Antifa” are known to employ confrontational tactics of their own. This group of the “Alt-Left” is taking no new members at the moment, but you can join these other counter-protests out in the street right now to rail against all that is revisionist, regressive, reactionary, or just plain bourgeois.

Opponents of incorrect designations of the Waffle Beanie, applying the label instead to stitch patterns such as cable (including fractured and/or lacy lattices), rib, pebble, cast-on, garter. They are known to rip the hats off offending wearers, using solar-powered waffle irons to char the beanies. Which they hurl at police.

This group, though technically “AntiAntipa,” protests the first course in Italian formal meals as revisionist gluttony. They are opposed to smoked meat in all its forms, and unapologetically conflate the origin of this appetizer course with the custom of burning heretics in ancient Rome. “Solo Mangiare!” (“Just Eat!”) is their rallying cry as they tip starter serving trays and smear ritual pig’s blood on the diners’ appetizer plates which they hurl like frisbees. At the police.

This group opposes khaki in all its forms. They invade clothing and department stores, and spray Dockers, Chaps and Tommy Hilfiger inventories with ritual pig’s blood purchased from the Antipa movement, above, which dries in camo or snowflake patterns, ruining the garments. Which they hurl at police.

This organization opposes all things masa, cornmeal soaked in limewater after grinding, enhancing the nutritional value of this staple flour in the tamales and tortillas of Latin American cuisine. They demand untreated cornmeal, insisting it makes for better grits. They are affiliated with the AntiYoYoMa movement, who feel that the renowned cellist indulges too much his “pop” sensibilities and that his name is entirely distracting. Where taco trucks park outside YoYoMa concerts, the groups will merge, sharing the rallying cry “NoNoMas,” and hurl cello-shaped pig blood (black pudding, Moronga-style) filled empanadas. At the cops.

Opposed to planetary exploration, this group has been known to litter SpaceX recovery zones with fresh banana peels, causing returning rocket boosters to slip and fall on landing, breaking their uprights and disrupting the company’s launch cycles. At first, they hurled heatshield-shaped ice cream sandwiches at the police. But now they eat them.

The “Anti Lava Bomb” movement, opposed not only to this recently-minted term, but to all newspeak associated with the recent volcanic activity worldwide, including terms such as “lava berg,” and “vog,” and “laze.” They feel that because this geologic activity is so leaden and plodding, observers have the luxury of conjuring up additions to the glossary at their leisure, which victims of other natural disasters don’t. They protest in “Fry-Ins,” where they lie prone en masse and inch along on their bellies mimicking pyroclastic flow, lit by battery-powered Lava Lites and hurl S’mores at police.

This organization protests the use of the nickname “Poppi” for “grandfather” in all social media, as well as the variants “Pop Pop,” “Bop Bop,” “Bobo” and “Boppie.” Equally abhorrent to this group is the shopworn “Mimi,” “Mimsy,” or “Noni” for “grandmother.” They wear “NO” symbol t-shirts with a line through “6/14” (Grandparents Visitation Day), and hurl Nik-L-Nip wax “PopPop” bottles at police during demonstrations.

We can’t make you love Rhianna, say those who are “Anti Grammy,” but they can protest the Grammy’s treatment of the critically-acclaimed, smash album “Anti,” which won nothing last year. Protesting lack of vision in the awards, rather than ‘achievement’, these devotees insist the awards, “recognizes bereavement in the music industry.” These RiRi militants hurl slices of Wonderbread at the police while singing the chorus of RiRi’s breakout single “Work” through the crowds.