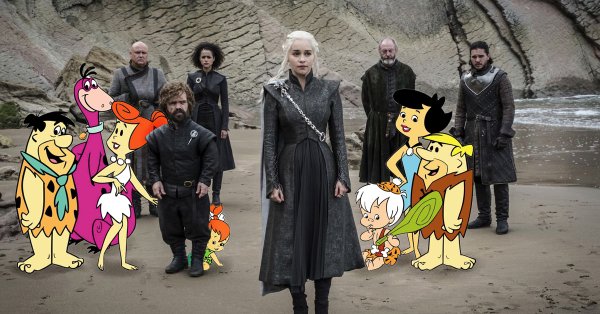 In Dragonstone, Dany’s fire-breathing house pets have powered the castle’s pizza ovens since the stars were new in the Valyrian sky. Recently, a chef abducted from Winterfell introduced an entrée with a folded crust suggestive of a “Christmas stocking filled with food,” or “calza,” from the ancient language Italian. Ned and the kids, however, want their cuisinier and his calzone skills back. House Stark advances by wrapping “Halfman” Tyrion Lannister in a sheath of dough and smuggling him into their opponents’ commissary.

First distinguished in the War of Five Kings, these descendants of The Maid of Orleans evolve into a peace-keeping force on call throughout The World. They are valued for their diplomacy and a genetic ability, traced directly to materfamilia Joan of Arc, to deflect catapult missiles and crossbow bolts with their helmets.

Chronicles House Balboa (house words: “Our Stunts Our Selves”) in the mountainous Westerland. Based in the fortress Casterly Rock, bastards are born here into a life of a mercenary, or “sellsword,” and given the surname “Rocky.” They are led by the combative Rambone, who commands by example on the battlefield by carrying his own step-stool into hand-to-hand combat for battle scenes. For the vanquished, Rambone renders the particularly gruesome “Death by Bliss”: to be tossed naked but for one hopelessly dulled Prenuptial Quill and a necklace of one-thousand wedding rings, into a pit of an equal number of Red Sonja clones.

Follows House Phonecians, an offshoot of the Wildlings, a race that has evolved to reject the Talk, Text, and Data plans imposed by the rulers of the Seven Kingdoms, and popularize a wildly disruptive “Unlimited Plan” beyond The Wall.

The randy Tyrion seeks to wrest from Podrick Payne the secrets of his legendary sexual prowess, though the young squire resists. The Halfman funds a fortune-cookie enterprise and prides himself on penning each prophesy. He orders takeout daily, commanding Pod to share with Court the included confections and read aloud such fortunes as “Someone would love to cuddle up with you,” or “Practice makes perfect,” or “A pleasant surprise is in store for you soon,” ending each with the phrase “…with a cock!”

The drivers of royal population growth, castle remodeling and siege repair, added to multi-kingdom road and bridge infrastructure demands, fuels a massive surge in markets for quarried stone. Passed over for promotion by Mr. Slate, Fred Flintstone uses his knowledge as Chief Excavator at Slate Rock & Gravel to corner the market for himself and pal Barney. Meanwhile, Wilma and BFF Betty guide the Gummies brand from family kitchen jams and jellies to a multi-kingdom biotech juggernaut, while Pebbles’ and Bam-Bam’s breeding of her Dino and his Direwolf leads to a highly prized population of royal guard pets.

With riches from centuries of tolls charged to those who would cross their river Green Fork, the House of Fry launches a successful chain of restaurants “Horca Verde” (“Green Fork”), featuring a wildly popular menu of Mexican-style fried pork rinds.

These tales of House Troll follows a race of elfin fellows who, as longtime residents of Westeros, were revered for their vigilant safeguarding of The World’s mines and minerals. Captured in a Dothraki raid, they are force-marched to Essos where they are enslaved and made to decorate the lawns of Khal vacation homes. The once noble race is further humiliated by the practice of “gnoming,” whereby Khals abduct the elves of rivals, photograph them posed in the dead, distant grasslands of the Dothraki Sea and bargain their ransom.