Did the Vikings discover Florida?  Imagine that Njord had blown a few L’Anse Aux Meadows-bound Longships off course way south, say, to the mouth of the St. Johns River.  The Vikings would have had a 400 year head start on the Spanish, and greeted them with open shields as they tried to claim the Fountain of Youth. Which by then, would have been a global bottled-water industry called ‘Valkyrie’, with a fermented version guaranteed to ‘Show the Northern Lights’ to any who drank it. 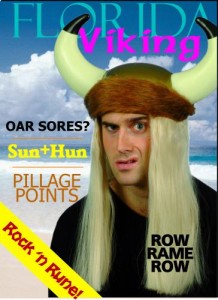 Commuter mugs would be the usual high-tech, thermally-insulated cups.  Same leakproof lids as now, but they would resemble skulls.

George Washington would have served no higher as Vice President of the new republic.  He would have yielded the convention floor to Hagar the Horrible (umlauts omitted), whose annual bath-day would replace the 4th of July as a celebratory event. Hagar’s descendants would rule to this day.   In the tradition of Hagar, the Father of our Country, they would bathe just once a year.

Hillary’s book would have been titled, “It Takes a Pillage”.

Florida would still be named so, but its license-plates would bear the motto, “The Sauna Shine State”.  All saunas in the New World would be solar-powered.

The National Socialists of post-Weimar Germany would find nothing usable for their propaganda from Norse culture.  Which would by then be a thriving capitalist New World superpower.  Its tanned, sandal wearing citizens would enjoy fast food at “Row Ins”.  They would fanatically follow a single, national NFL team: the Minnnesota Vikings, who would enjoy no opponents in their division. Or anywhere.