A history of texting. A brand-new technology that’s over 170 years old.  “What hath God wrought?” was the first message Samuel Morse sent on his spanking new invention, the telegraph.  Less is made of the reply he got, which was really just a repeat of his own words, though the better answer from the other end might have been, “Texting, IMHO”.

Telegraph is Greek for ‘far writing’.  It changed the world when it appeared.   Today, there’s another form of messaging just like it, by which words are sent one letter at a time.

Today’s texter may not know what a butter-churn is for, or how to bridle a draft-horse, but drop her into a busy railroad telegraph office 100 years ago, and she’d be right at home.

Of course, old-time telegraphy was commercial, exclusive and expensive, and only big business had it.  Ironically, it drove the development of the telephone, the symbol of instant, interpersonal communications, ancestor of the smartphone we all carry in our pants today.  Which we use to send text messages.  Which are just like telegrams. 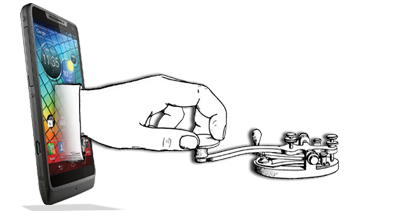 Texting, like telegraphy is by necessity, brief.  And both strive to be briefer through clever use of abbreviations.  Today’s texter would admire the way old-time telegraphers skinnied a message down to its barest.

Here’s operator John in Timbuktu, telegraphing another guy in the Himalayas, from back in the day:

[Note: ‘dear old man’ a traditional salutation in telegraphy, like the ‘dOOd!’ of today’s texts.]

‘Sure,’ you say.  ‘And we still have pancakes just like they did in the old days.  And photography.  They’re old time things that we still use today, just like texting.  So what?’

The difference is that flapjacks, despite centuries of culinary evolution, don’t change: there is no high-tech alternative.  True, it’s electric range vs. wood stove, but it’s still just batter and a griddle.  And photography has yet to use anything but a lens to focus and image and a light-sensitive medium to record it.  Texting, though, is elective.  Your phone’s contacts appear with buttons to ‘Message’ or ‘Call’.  Your choice.  And today, we chose to text message almost a quarter million times per minute.

And aren’t we cool!  Every generation jealously proclaims its technology as just the best, the most modern.  Hard to ignore that now-common stunt on morning news and late-night talkshows, wherein today’s texters are put up against quaintly-costumed telegraphers.  With the result that the texters are all thumbs against the old-time ‘lightning slingers’.

It’s as if car makers revived the hand-crank as an alternative to the ‘Start’ button on the dash.  Can you picture today’s Cadillac owner getting his shoulder into a handle on the grill of his CTS?  Because he wants to?   Like powering a blender with a team of oxen, or putting coal stoves in cars.

The old timers didn’t realize what they’d stumbled upon.

In the 19th century, electronic messaging had  to be brief.  Now, it’s because you can be.  And it’s because this type of messaging works.  The old timers didn’t realize what they’d stumbled upon.  This limit that texting, like telegraphy, forces on human communications is the appeal.  The 140 character limit on Twitter is in no way restrictive, it’s a generous allotment.   We can take a hint: just a mere first and last letter of a word are enough for our mind to fill in its meaning in the context of a sentence.  Texting takes this to the next level, just one letter of a word, next to another, and another.  And now, you’re talking!

An olive branch extended from one half of a temporarily non-speaking couple to another can be as simple as ‘Got wine?’ whereas a voice call would be fraught with emotion and recrimination.  The message can be saved, considered, replied to when cooler heads prevail.  Chill the glasses: Friday night, and possibly a wedding-date, are preserved.

I use text messages to queue up clients for phone calls.  ‘Call U @3?’ respects both our schedules and helps manage realtime intrusions in this time-challenged world.

The 1980’s: big hair, denim in all the wrong places, and a cute little gadget called the digital pager.  Discrete, though hopelessly numeric, they were pushed to the limits of their quaint technology.  An entire lexicon evolved from the simple discovery turning the display upside down unleashed an entire second vocabulary.   Go ahead.  Stand on your head right now and read this:

Look like: ‘hello’, right…kinda?   Was this the mother of all  invention?

Acceptance of symbols as signposts in our daily technological lives has made texting easy adopt.  The icons that direct our navigation through digital media run from the literal (‘?’) to the non (the ‘power on’ button on just about everything).

And emoticons, which some believed first appeared as this notation in a speech drafted by Lincoln in 1862: “applause and laughter ;)” are no doubt the oddest of all contemporary non-verbal expressions, as they are used and understood in either graphic or textual versions.

Feeling a little rusty?  Lookup your favorite text here on our exclusive Textulator:
Fast forward to the birth Arab Spring, 2010.  Put two-way text messaging in a few million hands, mix in some repressive governments, and you’ve got mobile regime-change rolling through the streets of Mediterranean cities.

All typed out one letter at a time, as deliberately as smoke signals in the Old West, or a prop plane spelling out a restaurant special over a seaside resort.  We’ve had 5 million years to put our opposable thumbs to good use.  They allowed our minds to expand, conquer the known world, invent low-fat mozzarella and, of course, the smartphone.  And we repay these obedient little metatarsals with that Repetitive Stress Injury unique only to hominids signalling their kind: Blackberry Thumb.

In New Zealand, a world leader in education at all levels, while the public school system’s Qualifications Authority prefers students stick with standard English, credit is now given for test answers that may include “text-speak”.

All that’s necessary is that the student ‘clearly shows the required understanding’.