The Doctor Is In – Trouble?

Doctors and suicide.  An epidemic?  How to stop it?  Well, break out the Dijon: hara-kiri is harder with a sandwich in your hand.

Doctors shouldn’t die.  Ever.  To learn that 1 of 16 surgeons have or are considering going their own way, something’s got to be done.

Mark Twain said, “It is amazing what little harm doctors do when one considers all the opportunity they have.”  Indeed.  We trust them with our lives.  If you’ve never had your chest cracked open like a clam, and allowed a strange man to put his hands on your heart, one holding a little vacuum and the other a razor sharp knife with which he spliced into your arteries, bypassing the byproduct of your self-indulgent lifestyle, you haven’t ever met a doctor.  Or mortality. 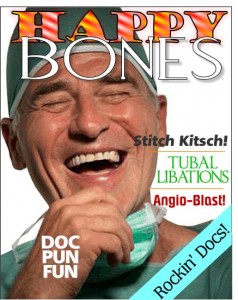 Our misplaced sense of entitlement, this idea that somehow we own some right to their skill upon being admitted to a hospital, isn’t helping.  Somehow, the public has hijacked the Hippocratic oath, which is really a somewhat private pledge between a doctor and his diety, and converted it to a public profession of servitude.

What is it?  Are they seeing something when they’re inside our chests that’s unspeakable?  Intolerable?  Not worth living to contemplate?

Any doctor could grab a feature spot on the 6 o’clock news to pronounce an epidemic any malady that claimed 6 of 100 victims.  Why would we not recognize the scourge that 1 in 16 doctors thinking of offing themselves as a natural disaster?  If squirrels in our neighborhood were cashing themselves in these numbers, we’d organize an intervention and a crew from Animal Planet would be there filming before you knew it.  What if 1 in 16 airline pilots was thinking of checking themselves out?  Would you be in a hurry to pre-board?

No one has any sympathy for doctors.  Who can?  They’re so smart, we can’t even imagine how smart they are.  They’re rich.  A lot of them seem, well…kinda fussy.  Never mind that they’ll stand over your bleeding heart for 6 hours, the tips of their fingers lost in the warm, fetid soup of your intermingled fluids, a 3-dimensional maze of gaudy, rubbery quivering organs.  If your problem does not present its solution to their wealth of personal experience at the exact moment in the operation that it’s needed, and there are exact moments one after the next for hours on end, they must rely on a combination of like knowledge and scientific method, and reason their way to a solution.  And the clock is ever running.

What to do?  Here’s what we can do the next time we have an operation, all to make the life of a surgeon a little more worthwhile:

1) Bring sandwiches.  In a cooler.  Coolers say ‘party!’ and will help make you feel more at ease, too, just carrying it.  The doctor will like it, and will like what’s in it.  Everyone likes a sandwich when someone else makes it.  Use good bread, better yet, fresh Ciabatta rolls.  And fresh lettuce.  Real mayo. You might not make it into the O.R. with the cooler, but, for heaven’s sake, make sure it doesn’t wind up at the nurses’ station.  As a precaution, you might want to write “NOT ORGANS” on the sides of the cooler in bold; and don’t bring dip…just think about that.

2) Give the doctor 20 bucks.  In a card would be nice.  Or, a gift envelope.  No, really.  The bill is important to you, sure.  You may think 20 bucks won’t matter to them, but it will remind him or her from where they came.  Generally speaking, doctors don’t all hail from a life of privilege and ease.  A crisp 20 is a lot like that sandwich.  It means something coming from a regular person.  It’s a hopeful gesture.  Give it to a family member or friend to give to the doctor on your behalf before the operation.

3) Write out in your own hand what you like and don’t like about the doctor.  Send this just before the operation.  This is both funny, and cheap insurance.  No one will let you, or themselves, die if they want to dispute something they’re written about you.  They’ll make an extra effort to make sure you recover from anethesia just so they can get a chance to debate.  The stuff you like about them will just make them happy.  Long after you’ve recovered and been released, years later, the note will make the doctor laugh.  The pile of notes accumulated by then will remind the doctor that life is good.

4) Let’s get some Tort Reform. In some states a surgeon can pay up to $200,000 per year, or more, for liability insurance.  Malpractice legal fees are up 35% in the past decade, far beyond any decent sense of inflation.  Nothing would add to my stress and lack of hope as much as numbers like that.  We need to get frivolous lawsuits off the backs of surgeons and all healthcare providers.

5) Then, let’s get those ‘other’ Torts Reformed. The other tort, a.k.a., “torte” is a dessert, made of confection with fruit, nuts, etc.  It is not a thing like a “Sun Dried Tomato Tort”, or a “Pesto Garbanzo Tort”.  Those torts are really just little quiches, and we really need to draw the line.  It’s causing confusion among the entire population, and I’m sure surgeons are suffering right along with the rest of us.

Maybe even more so.  Because they’re kinda…fussy.