From the BBC: ‘The age old question, what came first the chicken or the egg, has been answered.   Researchers in England say  the answer was in the way the shell is formed.   They say a key protein used to make the shell can only be produced inside a chicken.  Because of that, the chicken had to have come first.’

Fine, yet most things happen for a reason.  Sure, the researchers should be applauded for uncovering the ‘how’ of this development.  More is left to be understood of the ‘why’ chickens evolved shells for their eggs.  Little is known of the role an entirely different animal species played in the evolution of the hard egg shell. 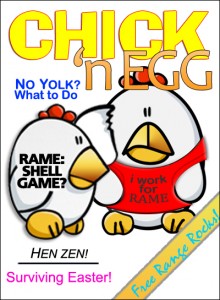 This method was fine for dinosaurs.  Like the T. Rex that the modern chicken traces its lineage to.  However, chickens didn’t like the association with the Killer King of All Dinos.  And, the egg was translucent.  Most hens quickly developed an attachment for the little likeness peering back from within the yolk-sack.  Hence families grew incredibly large.  This strained the fabric of chicken society.

The Queen of Chickens, troubled by this issue, was startled late one evening by a knock at the door.

It was a young hare whose card announced him simply as “E. Bunny”.

“I have this franchise,” the hare said.  “But it’s woefully short on a theme.”  He went on to describe how Easter was holding a place for some innovative branding.   And thus, he suggested  a calcium-based, solid opaque wrapper for the chickens’ offspring.  In place of the popular bladder-like container.

“I have these folks at a place called Fabrege looking for a shell to carve,” he went on. “The Calabash gourds they’re working with just aren’t making it.  And 6, maybe 8 major religions are ready to pronounce your eggs dairy.  A whole new interpretation of that nutritional category.”

“Surely 8,” E. Bunny shot back, “you can count on the Church of England if your eggs can be rolled down a hill.  The Evangelicals are in if the eggs can stand up to a hot water dye-bath!”  For the future, the hare offered, “I see a day when confectionary eggs will rival hen-laid in popularity.  That will take the pressure off your flocks.  Even your nests will be celebrated with rainbows of shredded cellophane.  And fanciful, candied hens will satisfy human cravings for the real thing.”

For the rank-and-file hens, though, a solid package would help sublimate pair-bonding.  This would allow the hens to focus on a preferred twice daily output of singular eggs, now firmly encased in marketable, colorable, rollable mantles.  A dozen to the carton.