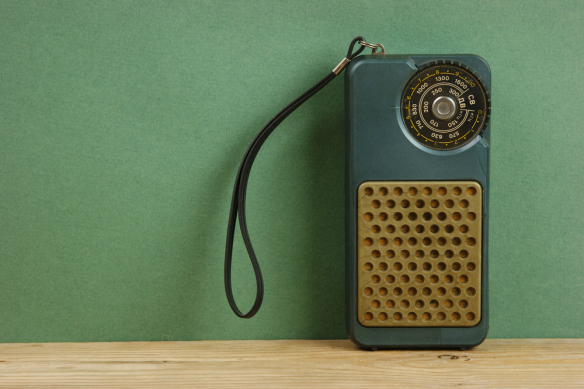 Listen to that call sign jingle from WABC Radio New York on a late July afternoon.  Close your eyes and take a breath of the hot sand wafting Coppertone and the sweat of Sabretts, Lucky Strikes and flat, warm RC Cola.  Gulls squawk as a beachhead of transistor radios then sync into a vast, monphonic consonance of “Up on the Roof”.

The roots of the smartphone light show.  When your grandma was a kid.

The transistor radio changed the world.  It’s right up there with moveable type, gunpowder, the telegraph.  It was the handle that leveraged social networking a half century before social media, it launched a ‘cultural revolution’.  It propelled breakthroughs in integrated circuitry that changed the industrial output of the planet and our habits as clients of a new consumer culture.

It was the original Instant On.  It was On Demand.  Mashed-Up.  Its Source was Open, and it was Social.  A revolutionary communications device and social networking appliance in one, easy-to-hold package.

Freed from the tether of the hand-me-down tube radio in their bedrooms, kids poured into the streets with their culture held to one ear.

And they discovered volume.

The device added new ordnance to the weaponry of teenage rebellion, and taught a generation to be discriminating patrons at the same time: “All Transistor. Not Tubes” Telescoping antenna, rarely needed.  A form-fitting leather case was included, a precise pattern of holes punched in the shape of the speaker.  There was a smaller, matching button-flapped case, clipped to the radio case’s strap, which held the single earbud.  None of these accessories was cool, and got thrown away.

They came in great numbers from Japan.

The transition of that country to steward of post-war American consumer consciousness was so swift, we were up until that time only familiar with their clunky, cast post-metal cars and stamped tin party favors.

The transistor radio was the beginning of our Japan Brand Consciousness, Inc., which spurred our purchases next of their diminutive motorcycles, then cars.  Ironic, as the ‘pocket radio’ was actually developed in the early 50’s in the US, with the help of upstart Texas Instruments. 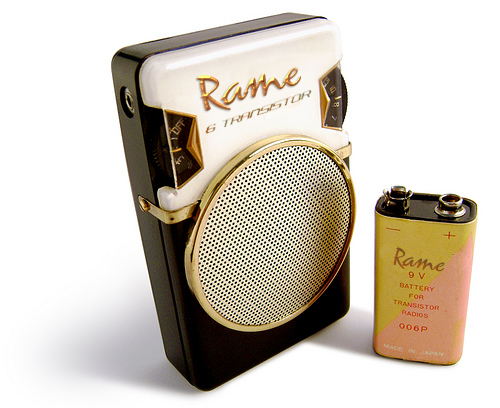 Opening the package was ‘Episode 1’ in consumer electronics unboxing.  The package the transistor radio package came in held its own joy and mystery, that precise berthing of the radio, battery and earphone in a molded styrene nest.  A fresh, softly metallic, ozonic plasticky smell, never known before or since, probably the outgassing of a few heavy metals, combined with hints of solder flux and plastic mold release.  And that odd little packet of silica gel, which hinted at the vast distance the product had been shipped, oceans traversed.

It was how an entire generation first experienced the excitement of new, of things you could buy and own.  And make your life better.  It was the Good Housekeeping stamp on all things foreign; it wet, yet never sated, the material cravings of generations.

First was the 6 Transistor Radio.  There soon was a 7 Transistor, and briefly an 8.  But the next big breakthrough was the 9.  Soon after that, manufacturers didn’t obsess so much with the labels or transistor counts.  What was important there was that we were now being trained in technological obsolescence.  You start with the iPhone, then there’s the iPhone2, then “3”, “4”.  And so it goes.  It’s in our DNA; rather, it’s in today’s grandparents’ DNA.

The AM transistor radio ruled just long enough for FM Stereo to arrive, and then we learned a lifelong lesson about obsolescence that warms hearts in marketing departments worldwide to this day.  New technologies are not just good because they’re cool, they’re cool because they’re good.  And knowing the difference is just as cool, and that’s something that can be sold, too.

So why was that little radio revolutionary?  Because of these three things:  it was portable, personal, and granular.  It was the first such device in human history; add that it could broadcast recorded music and live voice, and that made it a catalyst for social upheaval.

Portable: capable of easy transport to distant locations.  The radio was no longer an appliance of the home.  People could now detach and roam with their entertainment or information on board.  This was made possible by, and helped stimulate the growth of, the 9 volt battery as a power source, a miracle in its own right.  The future of communications would be mobile.

Personal: designed for ownership and use by a single individual.  In 1962, the 6-Transistor Radio was $15, the price of a pair of jeans from the Gap today.  The size of the 6-Transistor was as much a part of its success, this marvel of engineering that could fit into a shirt-pocket.  Some marketing touted the ‘shirt pocket radio’, though to actually call it such, was lame.

Granular: suited to entertain or inform individual members of a society, wholly or alone.  Making portable a broadcast medium put taste and personal preference within the orbit of a tuning dial.  Father now longer knew best, and no longer controlled the family’s only playlist.  Stations catering to different music and news flourished.  Aquarius could now dawn and the British Invasion begin.

A smartphone is, by comparison, evolutionary.  Mobile telephony had a 20-year head start by the time anyone ever heard of Android outside the Star Trek TV show.

Radio was the advertising medium of choice, really the only choice, for promoters of a ‘Weekend in the Country’ in 1969; the transistor put that message in the hands of a huge and eager target market that summer.  It was known throughout the east coast that the NY State Thruway was closed 15 minutes after it happened, and that echoed through the tinny speakers crowding stickball courts, beaches, and subways like a starter’s pistol shot.

What effect would an iPhone in the hand of every fan a week before Woodstock had on the event’s turnout?  Google Maps would have identified Yasgur’s Farm as a potential swamp in the event of a downpour, and the long-range weather would have confirmed a deluge was on the way.  Parents would have sniffed out on social media the omnishambles looming Upstate, the live traffic cams and X-selfies, and half the kids who were ready to go would instead have had their car keys yanked and yard work assigned.