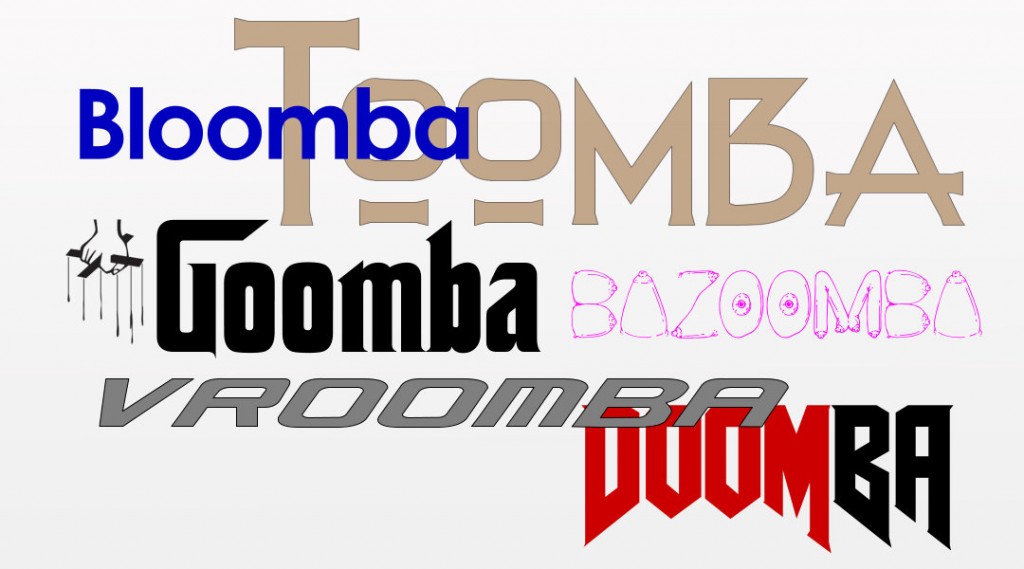 Goomba travels the dance floors of Italian weddings, accepting gift checks through a slot on top. Notes the guest’s name and the number of zeroes in the amount. Then, somebody could either have a good time or get their ankle broke. It could happen. I’m just sayin’.

Assumeba keeps people from jumping to conclusions. Deployed in courthouses, it blocks the exits of jury boxes if the sworn have reached verdicts prematurely. Has special rubber wheels to help grip the slippery slope of illogical reasoning. Ejects copies of the judge’s revised instructions to the jury, when needed, from a slot on top.

Bloomba was a secret droid employed by the New York City Police Department during the tenure of Michael Bloomberg. Funded by Hizzoner himself, Bloombas patrolled the streets of the Five Boroughs, seeking any discarded soda cups larger than 16 oz., or any containers yielding remnants of infant formula. The bots would send the GPS coordinates to headquarters and cordon off the area until officers responded.

Doomba owners who play the online game Doom follow this robot during its cleaning chores, hoping for clues to movements through the 8+1 levels of Phobos, Deimos and Hell. Doombas are easily networked for multiplayer engagements.  Deathmatch Mode is supported with the addition of Swiffer WetJet Power Pads for cleaning up blood.

Lumumba roams the countryside of the Congo, gathering from the ground the splinters of the violated young bones of the country’s first elected, and promptly assassinated Prime Minister, along with scraps of the dashed early hopes of Pan-Africanism. Powered by the memories of the complicity of the Belgian, American, and British governments and the lesson of Cold War hysteria.

Toomba was interred with Royals in ancient Egypt. The device was powered by 50 large scarab beetles pushing the unit’s dung-ball wheels in the manner the insect’s god Khepera pushed the sun and moon across the sky. It was believed to vacuum up the clouds from the day and the stars from the night to comfort and illuminate the spirits of the nobles on their journeys through the Afterlife.

Roombaba differs from a Roomba only in that it is soaked in rum. It’s central to a party game in which contestants chase after the robot on all fours, licking the pastry-filled center of the device. The individual efforts are timed, with points deducted for collisions with furniture.

Sis-Boom-Bah was a 19th century steam-powered band of robotic musicians, their (very loud) melodies variations on the popular cheerleading chant of the day: ‘sis’ (skyrocket flight), ‘boom’ (airburst) and ‘ah!’ (crowd reaction). They were added as the finale to street parades during 4th of July celebrations, but were quickly banned for terrifying draft horses and flattening cakes baking in ovens along the route.

Bazoomba is the exploitive, crass street name for a fruit and vegetable-cleaning robot whose funnel-shaped vacuum attachment is used, against the advice of the manufacturer, to enlarge aspects of human anatomy.

Nomdeplumeba is a robot that senses gender-specific marketing hazards and assigns pen names to authors seeking to conceal their identities. A female bot, it’s actually marketed under the pseudonym “N.D.Ploomba’. Endorsed by the estate of Dr. Seuss, the George Eliot Foundation, and J.K. Rowling.

Vroomba travels the floorspace of airline flight simulators. Synchronized with the throttle controls, makes a ‘vrooom, vrooom’ sound with the aid of synthetic lips to add realism to the experience for pilots-in-training.