The Cuban as Food 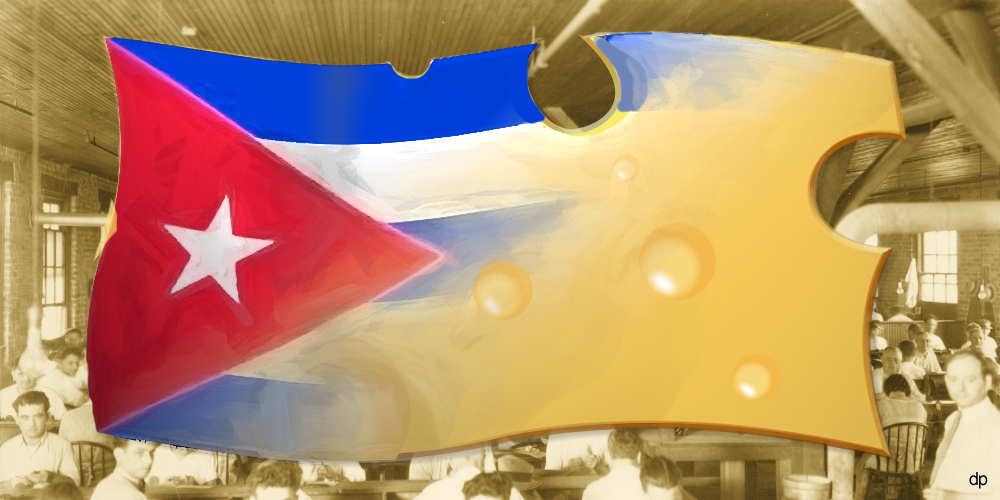 Our little legs stuck to the red vinyl of Mr. Juan’s dinette on those steamy afternoons. He kept his table radio on 1110, Woody Garcia officiating the daily battle of Salsa, Jazz and Merengue. We ached for Elvis and the Everly Brothers.

The backing track to Mr. Juan’s sermons was the thrum of Ybor’s other tinny radios injecting conga and calypso horn and the bat crack and cheer of distant ballpark play-by-play, the wail of babies and the ear-splitting caw of his prized old Cubalaya rooster Nano just below the backyard window.

On the stove was the eternally bubbling yellow saucepot of sofrito, a burping, savory brown tar pit, a reduction of cilantro and chorizo and salt pork wafting through the flat and out the windows to blend into the alleyways’ thick junky sweat, cook-spoon funk, piney reefer and the yeasty piss of spilled Bucanero suds.

His ‘Pote de esperanza’, Mr. Juan called the enameled cauldron, ‘Pot of Hope’, the place from which all life sprung in those Cubano households, and our own hopes for bellies full from it. Too soon, we three would comb our hair slick and cover our Tampa streets in what Cedro would call ‘Esperanza de la olla’, ‘In Hope of Pot’, still not even vaguely aware how much we’d miss the old man, by then gone and forgotten by most.

We were always hungry.

I am Francisco. Cedro, myself, and José Luis were willing hostages to Señor Juan’s tales of old, our eager eyes flitting to the stove-top and back to the serving dish empty on the dinette, hoping the old man’s handmade tortillas would appear sooner than later.

“We rolled cigars for Haya, at one of his places on 7th, near 15th Street. A specialty house. Habanas only. Old school, in the style ‘El Malecón’. Before the war. Before Batista took it all, and the rolling machines came, and the bastard I-4 and la mierda!”

Old Mr. Juan’s face puckered with the effort of the oath, and we tittered nervously, kicking each other’s shins under the table. Cedro mouthed ‘la mierda’ with a wild-eyed stare, which made José Luis burp Coco Rico onto his shirt.

“And the Cuban gave us strength,” he said. “No, you can’t eat a Cuban,” he would caution with a crooked finger skyward, “Not the people. Or a Cuban person. You eat the Cuban.”

He said it is the only sandwich in the world named for the people of a nation, and just that: a Cuban. The residents of, and culture that defines, a singular Caribbean island country. Not ‘Cuban Sandwich’, no ‘emparedado’, mind you. Or ‘Cuban Ham and Pork and Cheese’. You will accomplish little at the deli counter if you were to say, “I’ll have a Greek”, or ‘A Russian to go, please’.

And the sandwich is pressed so that it can fit, he revealed, one into each of the four pockets of a man’s Guayabera shirt. In this way, he confided, the Cubans could outwork the Italians and the Spanish who left the floor to eat.

“They wanted our work, our jobs,” Mr. Juan said, “to eat our lunch. But we ate our lunch there. We ate our Cubans.”

And it took the skills of a cigar-roller, the torcedor, to wrap the Cuban in wax-paper so it would not leak in the pocket and give the scheme away. “Our work did not cease. To them, we were las máquinas…the machines!”

With that Old Juan drew a thin loaf from its paper scabbard like a Conquistador’s rapier. Our eyes bulged in wonder. From a bag in his icebox came packages of ham and jiggling roasted pork and homemade pickles from a jar. He sliced the loaf as we plucked at the flakes of crust with our little fingers, Nano clucking outside the window, excited by our chicken-like movements.

Alaska may be baked, he said, but that is not a people, and chicken may be from Kiev, and ditto for that, too.

He set up an old waffle-iron on the counter. When it was just right, he pressed the first sandwich, “Some say this is to close the air holes in the bread to keep the devil out.”

Cubans! We’d yet to have one. It was a grown-up’s food. To ascend to this elite realm was a thrill beyond compare. Trembling, we tore into the sandwiches, pausing only to slap off the odd mosquito or gnat. Our mouths stuffed, Cedro mugged with a comma of Swiss dangling from his lips, Mr. Juan warning that playing with food was a sin, the boy quickly swiping the sign of the cross over his t-shirt, leaving wisps of mayo.

Old San Juan cut three more chunks off the loaf, sliced them, and began to assemble more sandwiches, ‘pequeños’, or ‘small ones’. He measured off three sheets of waxed paper and his hands flew deftly around the sandwiches, a priest prepping the Eucharist. His nine fingers, the left index having been surrendered at Verdun, creased and folded the wrappers with blinding speed, skidding one by one across the table to a stop in front of each of us.

Cedro stared at his, put his hand carefully over the little package, and pressed down slowly with his palm.

“What are you doing?!” Old Mr. Juan snorted.

“Keeping the devil out,” Cedro said, hopping down from his chair and running to the old man’s side to hug him at the waist.

José Luis and I clapped. Then we were all again at the table, scarfing down our Cubans, the jiggling pork and the ham and cheese and pickles the new possibilities, the new tastes in our lives, patting the gifts in our pockets that would not leak.