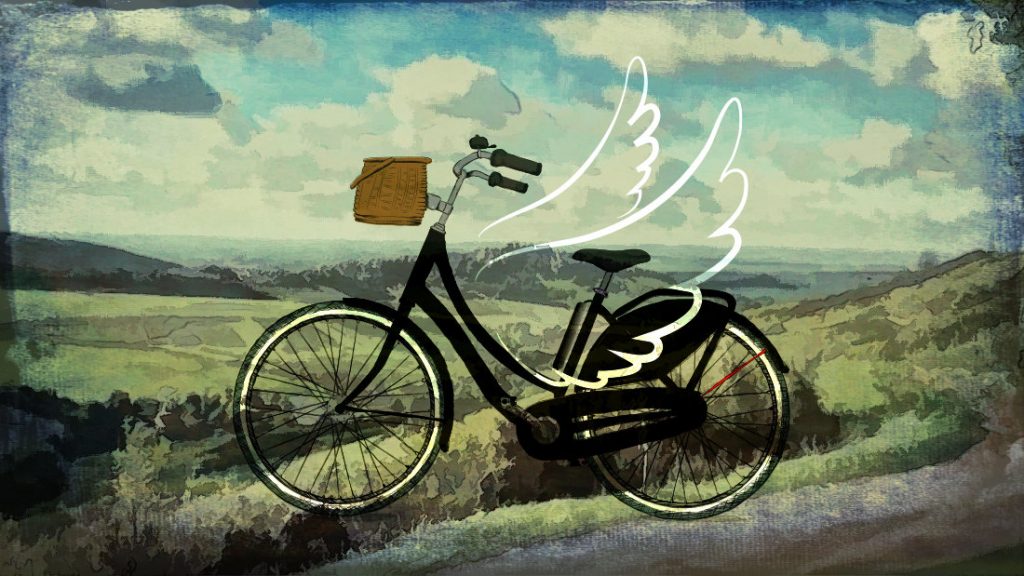 “The hill will break your neck, Claire Roux,” Mssr. Fabre would say.

Aside the road the last apples clung to thinning canopies, dark ghosts sapped by the season’s first frosts. The air was a crisp sigh of moist, upturned earth drafting the sweet taint of dewy leaves, moldering stalks and wood smoke. Beyond, the morning fog cut the mountains off at the waist. Soon the skies would clear and admit a day bright and dry.

The bike between her legs chattered in protest as she dropped into the pull of the treacherous hill, her hands firm on the grips and her skirt gathered back to front with the real Franc Mssr. Fabre had given her, pre-war, weighty, no shoddy aluminum Vichy marker.

For all the danger, the speed was a seduction, the tires’ wobble a thrill in the struggle to steady the handlebars. Otherwise, it would be 10 minutes’ walk down to the valley, dodging ruts gauzed with thin ice, the rimy mud crusting her soles.

Not this day. At the bottom of the hill, having surely squeezed the last from her brakes, Claire chattered off onto a side path to a gate fronting a trim stone cottage set comfortably back from the road among the trees. She walked her bike around the house and parked it inside the shed there.

It should be that Mssr. Fabre answers the door to the house, his moon-face calm and warm, his eyes moist. He should wear his signature bowtie on a crisply pressed shirt, his one indulgence for her visits. And she should press another for him, as he took his customary nap, to wear on her next visit and hang in his closet before she should leave.

Claire’s mission of mercy this day should be the delivery of the medicine he was unable to retrieve from town on his own. Along with a few staples and the occasional letter or card or cheering missive from Fr. Albert at St. Astier, their church, through which she volunteered for this work of visiting the cloistered and forgotten.

It should be that the home would be warm and light, thick with rugs and shadowed windows, the scents of the fall nosegays the two had clipped and bundled together, the ticking of two large clocks.

Now should be the time they sit and sip their tea, the light should grow warm and bright in the room and the old man smile now and again recalling old, treasured confidences.

Then should there come from high up in the house, the soft tinkle of a tinny bell.

And Mssr. Fabre should lead them in a short prayer.

This should be time for her to go upstairs to the attic to retrieve the message that had just arrived by the efforts of ‘Papi’, lord of the loft, Mssr. Fabre’s prized proud Bloody Red and Blue Eye. She should return with the capsule from the pigeon’s leg, and hand it to Mssr. Fabre. As was their custom, he should open the little canister, remove the paper folded inside and, without reading it, should hand it to Claire.

“S’il vous plaît, PO” he should say, in deference to the honor ‘Premier Ordre’ conferred by General de Gaulle himself, from exile, on her third anniversary of distinguished service to the Maquis, ‘fighters of the bush’.

This is the way things should be, the way they were on all those other days but no more. Claire let herself into the cottage with a key from under a pot on the back porch.

The house was cold and musty and empty of its larger furnishings.

This day, for appearances, she brought a small tin of fresh puree from chestnuts she’d collected in town, two biscuits, and enough pipe tobacco for two bowls. Mssr. Fabre’s eyes would have misted at the sight. On the road here, Claire could use them to buy a favor if needed. One hoped.

Claire stood before the gaping cold fireplace staring vacantly at the mantle as she ate the contents of the tin then licked the spoon clean. Before her was the familiar grainy photo of a young Mssr. Fabre and his then-new bride Claudette, and Claire had to admit, having endured Mssr. Fabre’s routine decrees of her resemblance to his late wife, that the likeness was notable. The same brunette sheen, in bangs, the sharp arch of the brows, clear eyes, the smallish keen chin. The young Mssr. Fabre draped his hand gently around the slim waist of her chiffony monochrome caftan, the sheer of its fabric obvious even in this aged photograph and eclipsed only by the radiance of their wide young, hopeful smiles. They were at the entrance to an inn in Morocco, beneath a sign ‘Hotel La Vallee Des Oiseaux’: ’Valley of the Birds Hotel’.

And then, as happens, she not so much came to like him in the grandest and deepest sense as much she felt the things that she disliked simply fell away, the gaudier of the embroidery unraveled, until all she could see was the kindness and grace in ‘Old Bird’, his code name, assigned by the Maquis.

That, she wondered may be just how love happens, after all. All the time.

Not all residents of the house were gone. In time she could hear the little bell tinkling upstairs. In the attic, a few remaining members of Mssr. Fabre’s decimated flock habituated the open, messy pens of the pigeon loft. There she found the venerable Papi, reliably making the journey still, when called upon.

“Hello, little man,” Claire broke a few pieces of the biscuit she’d brought, and fed Papi from her palm. No surprise that he was calm under her arm. They’d been tested enough.

“Five days since my last bath, Papi, and you harbor no ill. Or you’re none the wiser.”

She deciphered the note: a vehicle would leave by noon. Claire guessed it had been the latest arrival in the town square, that one high, rickety troop carrier on the Wehrmacht’s worn synthetic Bunas, overinflated, with worn treads ripe for a blowout. They would overload with so many mere boys, pink-faced, eager gangsters, and drive fast as the Germans were now on the move, autumn advancing with them, and there would be little resources or time to investigate accidents.

A chill traced Claire’s spine. She looked out the attic window, to the bottom of the hill nearby, the lane patterned with the scarlet and brown and yellow leaves from Mssr. Fabre’s untended orchard turned left and disappeared up the valley, for some, this day perhaps, to eternity, adding the red of their pedigrees to the foliage-splattered roadbed.

Claire could feel her heartbeat in her ears. The attic’s silence consoled her. She wanted to stay there and not go downstairs and through the house and out to the shed and her bicycle and not be the one to haunt houses empty but for memories and old lovely photographs and find herself eating a friend’s puree as predictably as the sharp coppery, melancholic charms of autumn were to yield to the cold, dark advance of yearend, as surely as the occupants of an oncoming troop carrier would obey forward motion and gravity as obediently as she’d once tipped Mssr. Fabre’s wheelbarrow its weight of melons.

She rarely thought of the danger, of being captured and the interrogation and even the possibility that she would surrender some information she couldn’t help. Capture would be the result of poor planning or a lapse of caution, and against those she could guard. Or, it would be the result of betrayal and against that there was no defense. And she knew that if she weren’t planted in her footsteps just now, that would be a treason of her own and the only victim of that deception would be her own humanity.

“There are moments that make saints or heroes of us all,” Mssr. Fabre would say, “and some people and moments that are none of these.”

She went down the stairs.

The air was chilly in the sunless lee of the house. The vines on the trellis alongside the shed had grown unruly that summer. The grapes would have done better to lapse with Mssr. Fabre as their fruit had fallen expired, staining the patio to the delight of no one, but the for the pigeons, she saw, who clucked and pecked at the bounty. Life goes on with or without pruning.

Claire picked her way around the frosty rot, and closed the door to the shed behind her.

Time was short. Inside, her breath hung in the air before her. She removed the grips from the handlebars of her bike and with a small hooked piece of wire, carefully fished tightly-wrapped cloth tubes from each side. Inside each were stacked three 9mm pistol rounds. The bullets were round-nosed and dark, frangible rounds that would disintegrate on impact, a new mix of Bakelite, tungsten and titanium. Hopes were high that these would penetrate the larger truck tires and leave no recognizable remnants of a bullet behind, marking impact as no more than an untimely blowout.

It had worked before, the previous designs effective against smaller vehicles. Two towns distant this summer, the exploit had cost the Reich a staff car and the three officers in it.

Claire had more cargo, a piece made up as a hand-pump clipped to her bike’s frame. It was the barrel of the 9mm British Welrod, a silenced pistol that another Maquis would fit to a magazine and grip, and with the ammunition she’d brought, fire from the brush alongside the road at the bottom of the hill into the tire of the oncoming truck, at very close range. It was to replace the barrel usually kept at Mssr. Fabre’s disguised as the base of a table lamp but having gone missing with the furniture.

Claire wrapped the barrel and the ammunition in a rag and placed them in an urn under the potting bench. She checked both ways from the shed door, and left pushing her bike. Beyond the old orchard, she rode the footpath that led across the fields of the valley, through a rustling natural topiary of golden grasses, dried shoulder-high tussocks and crusty seedpods, to the low shoulder of hills beyond and a road that would take her back to town from a safer direction.

On the road, she came upon two nuns walking, the Srs. Marie-Thérèse and Clémence from St. Astier, the shawls they’d added to their habits loosed with the warming sun. Claire hailed her approach with her bell, the tinny peal recalling Mssr. Fabre’s loft, the birds, obligations and regret and old photographs.

And his advice to her about her job at the bakery in town, “Don’t eat too well”. Or others may think you a collaborator.

She thought of nuns on foot and the Reich seizing civilian bicycles more and more each day and wondered what kind of foolishness it was to treasure the hope she had for a long, slow soak in a quiet tub.

In the distance planes in formation droned towards the front.

Then directly overhead, a Bloody Red and Blue Eye, its little wings pumping in fits and starts, rocketing his shimmering bullet-body through the bright sky on some new mission.

A secret force of nature as sure as the seasons, she thought this bird in this valley.