The international magazine eFiction India held a competition in which the above illustration was suggested as the starting point for a short story.  Contestants were asked to explain who the individuals in the photo were and what they were talking about.  The story would also need to include a female character, not shown, to be worked into the plot.   My entry was this story; it was selected and was published in the April 2014 issue, Volume 2 Issue 7. 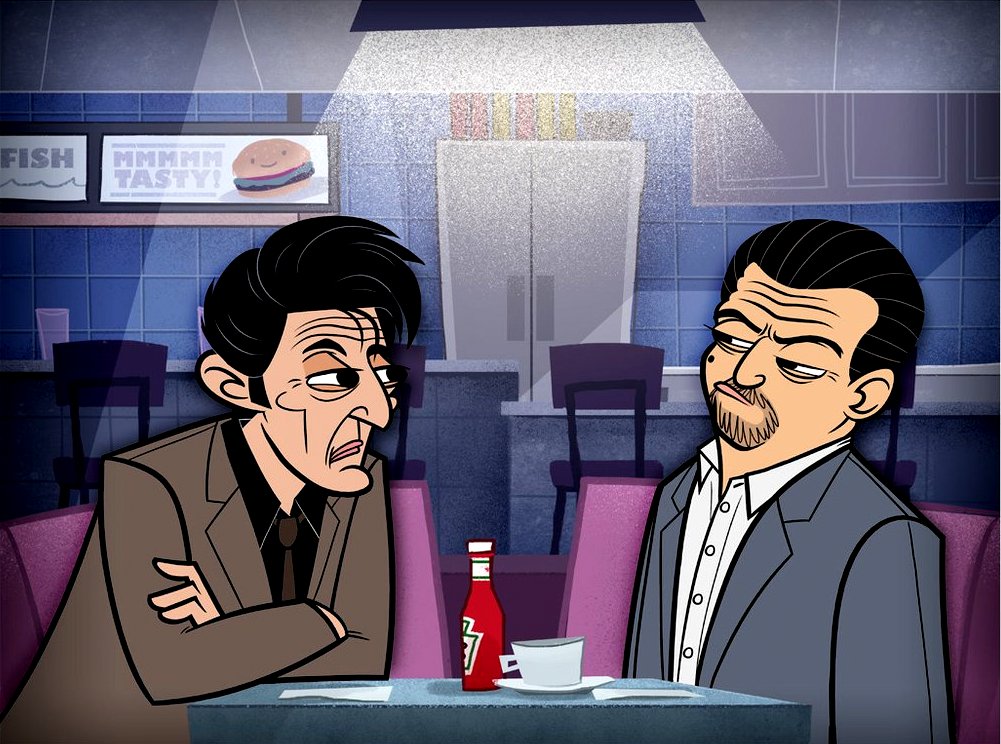 There’s these two guys sitting together in a diner.  One guy is Mel LaRosa.  He looks just like Al Pacino.

The other guy in the booth, across from him, that’s Joey Rubano.  If Joey Rubano and Joe Mantegna were sitting together instead, you couldn’t tell who was who.

These guys are stunt doubles for the actors that look just like them.

If you asked either of these guys, they’d tell you, famously, that their celebrity twins copied their looks from them.

Not the other way around.

“What?  Coupla guys come across a stash buried…”

“Lame.”  Joey scowled.  “You call that a location?  Whaddya nuts?  And they don’t dig it up anyway.”

“Cute,” Joey scowled. “We’re never coming back from there, you know. What kinda location is that?”  Does Screen Actor’s Guild even go for that?”

“What have I been sitting here saying?!  You think I don’t know that?!  That’s what’s so…”

“So…” Mel whistled kinda gentle through his teeth. He turned to the plate glass window next to the booth.  He looked at the car parked outside, in that space just under their booth.  He smiled at someone.  “So be-yootiful.”  He splayed a few fingers in a scant wave at the woman in that car.

This was not lost on Joey, “And you got Angie coming.  At least.  For you, huh?”

“Hey, there’s women there!  They got over 8000 people now,” Mel leaned in, grinning, “Some nice women.  Some from the studios”

“Which is where they should shoot this,” Joey said.  “Green screen it.  Fill it in with CG.”

“Too many people live there now.  Now everyone here knows what it is.  What it is there.  What did I just say, almost 8000 people?  Yeah.  There’s about 300 just from studios.  You seen the GoPro’s that comes from there?  People know what it looks like, how it feels, the dust on their feet, the sunrises.  Some things you just can’t get from a studio.  Or computers.”

“I don’t know if I can leave here,” Joey brooded.

“Look.  Every movie now from there is a mega hit.  Billion in box office, guaranteed, just like that, boom.  The merchandising is off the charts.  This is our chance.  Did you look over that contract?  Madonne,  Joey!  Think about that stack!”  Mel motioned for the waitress.  “Besides, there’s gonna be a way back, soon.  That’s all you hear about now.  The ore ships start coming back this way in another year.  And we got that ‘when and if’ in the contract, so it won’t cost you a dime.”  Mel looked up, smiled:

Angie was tall.  Brunette, you know?  Had a soft, bright face framed by loose, loopy curls.  She smiled broad at Mel, then leaned over Joey, kissed him on the forehead. She wore a fuschia T-shirt, and nice carmine leather slacks.

“They’ll let anyone in here,” she winked at Mel, nodding in Joey’s direction.

She dropped her oversized bag on the seat next to Mel.  She fished out a thick manuscript and slid it towards Joey.  Then she sat down next to Mel.  Angie’s bracelets rattled on the table top as they braided the fingers of each other’s hand.  Like kids at a picnic.

This was on the title page of the script: The Palus Job.

Joey read that, and wheezed, his shoulders drooping.  It was funny the way he did that.

“I got us five years at the Summit, on Missionary Plains,” Angie chimed, “Subsidized.  We pay pennies!  An option to renew if there’s a sequel.  It’s a 100 year aquifer there, cold, deep and sweet…”

“And three more domes going up,” Angie turned to Mel, enthusiastically.  “Be done before we even get there.”  She turned to Joey, “I’ve got to fly to Mumbai to work out the rest. I’m seeing both studios there, and Pacino’s people, because of his part with the Rover.”

“OP,” Angie began, pointing to the sparkling appliqué just below the neckline of the shirt, “That’s the Oxia Palus.  That’s the quad where the action is.”

“And what’s a ‘Chandrayaan Happy-9’?” Joey pointed to the embroidery on the sleeve.

“That’s the Indian Rover they find the treasure with,” Angie beamed.

“We really don’t have a lot of choice here,” Mel said.  “This is what we do.”  He looked out the window, and said soft: “It’s kinda like the movie.  It’s our big score.  Do this, and we’re done. They’re gonna retire soon, anyway.  Pacino’s as much as said so,” Mel concluded, thought a moment.  “Then what?”

“It ain’t enough that we act as actors for a living!” Joey protested. “Like you said, Mel, then what?”

“You know that we’re just this close to a deal for that series about you guys for History Channel,” Angie said.  “There’s a year in that.  And that streaming gig for Virgin.  There’s ready to go with you whenever,” she snapped her fingers.  The sound pleased her.

“Couple modern day Columbus…Columbuses,” Mel knit his brow, added for no one in particular, “Columbi?”

“And Ang, tell me.  How you gonna spend your time?” Joey asked.

“That’s what so exciting,” she gushed. “There’s so many opportunities there.  Everyone there does lots of different things.  I’ll have clients, there are other clients who need representation.  And my cousin Tony has a lock on a new business there.  It’s a new business.  Already taken off.  Rovers. The business is huge!  Used Rovers, parts for Rovers.  Maintenance.”

“Cars,” Joey winced.  “That’s rich.  Paisans with the used cars.  How unique!” Joey looked out the window of the diner, and up at the night sky, and sighed.  “Long way for three googootz from Bensonhurst.”

Angie pulled a child’s Deely Boppers from her bag and clipped them to her head.  The twin antenna bobbed comically; someone in the diner clapped.  Someone else whistled.  Angie waved.

Mel, halfway through a sip of coffee, gagged lightly, a hint of spittle appearing on his lips.

Angie dabbed his mouth with a napkin, and in a cartoon voice cooed, “Take me to your leader.”

And like that, they agreed to go to Mars.