Cars on Mars.  Traffic jams.  Off-Road Rage.  Fender Benders.  Pileups on the Interquad.  Chop Shops!  Were we asleep at the wheel of these driverless buggies?  How, and when, did it get to this?

Seems like it was just yesterday you could rove the Northern Lowlands for days without even seeing another vehicle.  Rake the Medusae Fossae from ridge to ridge unmolested.  Sample lineated valleys in solitude but for the whirring of your own servos.  Now bulletins like this have become commonplace:

BAMBERG CRATER, Mars (AP) – “Curiosity Super Deuce II had a front wheel crushed by a Chandrayaan Happy-9. The Americans were maneuvering over a promising albedo feature, while the Indian craft was trolling programmed sub-soil routes. “They came out of nowhere,” the Chandrayaan crew protested. The Americans were unimpressed, “The Happy is an Automon-Heavy class,” Lt. Cmdr. Angela Commons explained, “Free-range is prohibited in that zone. We had the right of way.”

Cars on Mars.  As sure as spent fuel-tanks fall from the sky and life comes from space, you can bet these traffic woes on Red Planet are destined to get much worse if we don’t get in gear now. 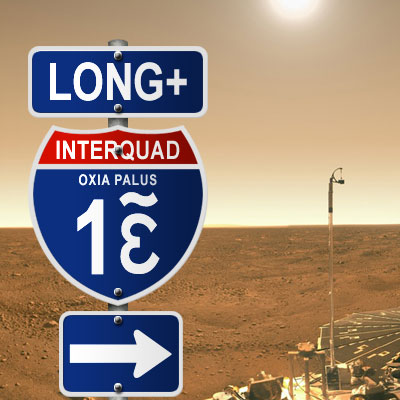 Oh yeah?  How about this:  Within a generation of Sputnik, space junk has become a major headache for space flight.  And: the world’s first auto accident happened in 1891, five years before Henry Ford built his first car.

It’s Drowning Book’s Law: the severity of a social problem is directly proportional to how trivially it’s regarded immediately before it becomes a blot on the landscape.

This ain’t your grandpa’s Star Trek, this is no run down the street to pick up a pizza.  No one’s interested in ‘boldly going where no man has gone before’ while running multi-billion dollar buggies from millions of miles away.  The best places to poke around on Mars have long ago become natural attractants to all who follow. Parking in one place for a long time, which back on Earth means someone’s stuck, is now a sure bet that something good’s been found on Red.  Teams landing now are looking for avenues already trodden, landing zones already well-mapped.  On the way, they’re going to want to blow someone’s doors off.  It’s just natural.

Mix up a bunch of  competing engineering teams from various industrial cultures, and you can bet that Mars has no defense against becoming the Solar System’s biggest R/C track.  Remember, man was within just a few landings of his first stop on the moon when he’d smuggled a 5-iron and a Titliest up there to whack around.  On live TV. 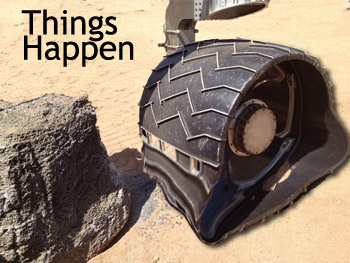 Things Happen.  At a couple billion each, including tax, title, and destination fees, countries are also going to continue to demand services.  More and more we’re hearing ‘roadside assistance’.   We already hire private corporations to lift us to Red, why not a planet-wide maintenance contract to take care of those little messy details like flat tires?  Unfortunately, once that rumored Mars-wide towing contract is awarded, there will be another incentive to cheap out on the vehicles.  Which will only make the road hazards worse.

With help for a price just nearby, what’s to prevent some countries from flooding the planet with cheap compacts?  One way to shave costs is to skimp on the safety features, like crash-avoidance, for instance.   With a round trip radio signal taking half an hour, the instruction to ‘change lanes’ would arrive woefully late to avoid that head-on.

There’s rumors of a factory full of unused Yugos the Russians have been hoarding, which they’re aching to just dust the Martian inner atmosphere with.  At those prices, you don’t have to mitigate the impact of entry, just drop of a few hundred at once, and see which ones make it. 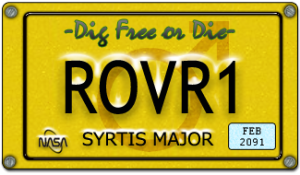 Rules of the Road.  Which side?  Back in the day, we drove on the right.  Which was, right.  But as soon as the British, Japanese and Zambians got there, and all  hell broke loose.  Then the speeding started.  Once countries started claiming the entire crater the moment their wheels crested the rim, it was pedal-to-the-metal for everyone.  There was less and less science in each vehicle arriving, and more torque.  “Aim It and Claim It”, was the slogan, drifting was the technique, and vast pristine plains were contaminated by alluvium ejected by skidding ‘carts’.  It’s estimated that there was more damage done to the sub-surface strata in a few hundred Sols than a hundred millennia of meteor showers.

Soon you needed a map to tell the landing zones from the actual craters.  For the first time, discarded parachutes became an official road hazard, a curse that’s with us to this day.  And there were two classes of vehicles: the plodding, science-driven rovers…and the ‘carts’. 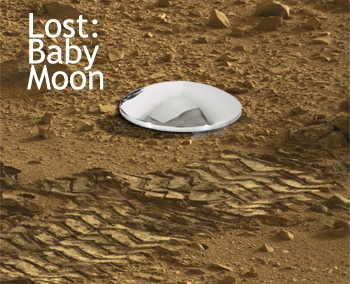 Parts is Parts.  Since it could cost a $100 million and a year’s turnaround to fly a replacement wheel to the planet, slightly-worn replacements on site were soon  found to be worth small fortunes. Which brought a whole new hazard to interplanetary exploration.  One minute your chassis was the pride of a nation, trundling along, prospecting a quiet crater; the next, your data streams have terminated and your radios went dead.  Soon, your parts were scattered throughout the Marscape, a wheel showing up on this country’s rover, camera mast on that one’s cart.  ChemCam laser were being repurposed as a cutting-torches, and ‘chopping’ had arrived on the Red Planet.

And that brought us to the present dilemma, where good old, solid exploratory science, carried out in the interest of knowledge and the greater good, meets up with the kind of larceny this newest of commercial ventures here is demonstrating: MarsPar. 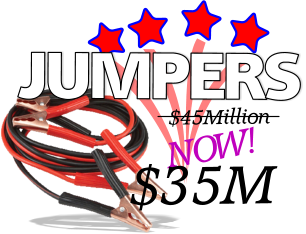 For the same reason the Earth motorist doesn’t drive around with a trunk full of spare parts or emergency gear, the average Red mission just doesn’t have the budget to cover every contingency.  And there’s that issue of turnaround, and all the while your rover’s down that meter is running on Mars, and it counts in the millions.  So, it’s a seller’s market for critical spares.

But customer loyalty is not lost on MarsPar, and they do believe in spreading the wealth.  From the beginning, they’ve been giving Green Stamps with each purchase, 1,000 per million dollars spent.  Redeemable here, there, and all space stations in between.