The Paleo Diet is the hottest thing since sliced bread.

No thanks to a cliché as old as prehistory itself, which has brutish cave dwellers gnawing on hunks of unrecognizable quivering, bloody meats, in the glow of their fires.  Not until the Flintstones was the caveman’s diet dignified, with ‘Bronto Burgers’, ‘Dino Ribs’ and ‘Trillo Bites’, and classy eateries like ‘Le Chateau Rockinbleau’.

Now there’s evidence that the menu in ancient times really was anything but boring.

It’s just been found that prehistoric Europeans were using Garlic Mustard as long as 6,000 years ago, shattering preconceptions about human’s gastronomic heritage.

A footnote to the news release of the Garlic Mustard find, was that of an incidental parallel discovery of the identity of a singular individual, from engravings and rock-wall paintings.  From all indications it was a woman, celebrated in her region for what appear to have been early culinary skills.  As research continues, her portrait emerges as vividly as the celebrated ‘Otzi’ the ‘Iceman’ of the Swiss Alps, in this case not from the preservation of her body, but a record of late Paleolithic recipes and techniques just now being painstakingly interpreted from engravings on bone, pottery shards, and cave-wall paintings.

Her record, assembling slowly as this is being reported here, has been called ‘The Paleo Diet’. 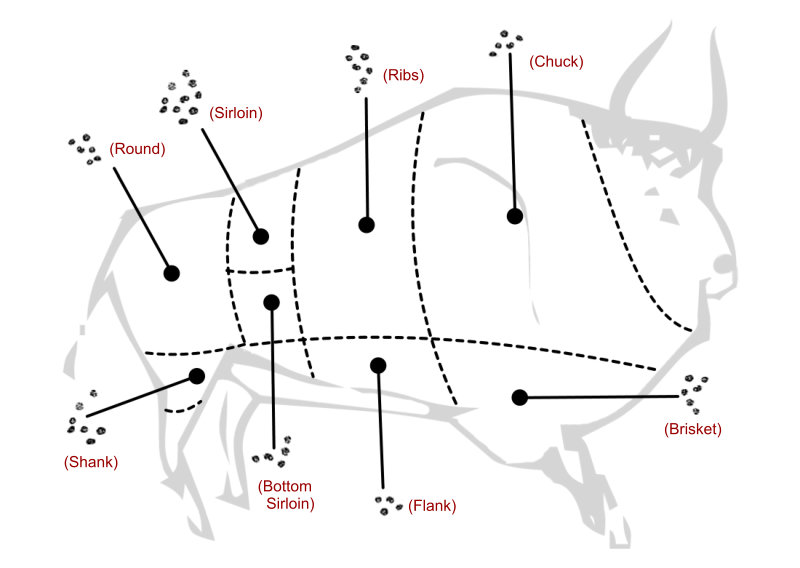 Researchers have painstakingly reconstructed from the faintest surviving lines of a painting on a cave wall near Limoges, France what is likely the oldest butchering guide, attributed to Paleo.  Curious patterns of dots reference the various areas of a bison’s anatomy in this ‘Bison Tableau’, or ‘Bison Chart’.  Analysis of curious patterns of dots which appear as labels of different cuts of meat has not only boosted our understanding of Paleo meat-dressing skills, but this earliest of written languages as well.  [Note: descriptions on the chart in (  ) are interpretations of the patterns] 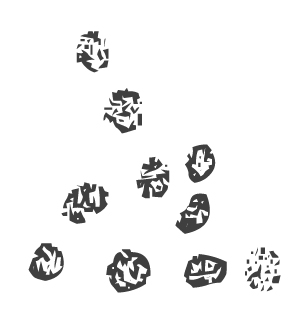 It’s not the first time that early language specialists have tried to translate ‘les pois’ (‘polka dots’) found in the region’s cave system.  The arrangement of dots shown, for instance, was first interpreted in the 1950’s to mean the removal of ice from a cave-entrance.

Only recently, given the context of the find in a grouping of what appears to be the first known rendering of a recipe for a type of stew, was the secondary translation of ‘deglaze a cooking pot’ ascribed to the pattern.  From the same cave wall where Paleo’s identity was first revealed, are these interpretations of les pois deemed to be in her hand, revealing the Stone Age recipes that made up some of the Paleo Diet:

Rat-a-Two-e: dried and smoked, served on a skewer, in pairs.  Served with a garlic mustard early Hollandaise, prepared with duck eggs and bison butter.

Terra-Lactyl: ‘Milk of the Earth’.  Ibex milk infused with garlic mustard extract, chilled in glacial streams, a kind of prehistoric savory milk-shake.   No doubt the inspiration for the inscription ‘got lac?’ seen on cave walls in the region.

Tea-Rex: a ceremonial drink made by boiling nettle leaves.  And garlic mustard.

Boar Terrine: Wild boar fillets pounded to a purée to which the liver is added, the pâté cooked in a covered crock and served on einkorn crusts with a garlic mustard and nettle-zest relish.

Toads-in-the-Holes: literally.  Soup bowl-sized holes are carved into sandstone, into which toads are placed, one to a bowl, alongside hot coals wrapped in leaves.  This is covered with the upper skull of a bison, and left to steam.  Served with a wild pepper and garlic mustard Romesco.

Rindocerous: actually wild boar, a specimen chosen for any resemblance to the much larger Woolly Rhino, cooked in a stone-lined pit.  Hot rocks are placed inside the pig’s chest cavity, along with an assortment of  berries, wild onion, and garlic mustard.  This is topped off with a few gallons of ‘Tree Blood’, a heady mead of wild honey and crushed cherries.  The boar is wrapped in its own hide which has been previously soaked in brine, and contains the liquids.  Serves 40.

Dinersaur: not a food item at all, but likely a reference to the first paying customers.  Some caves show evidence of regular visitation by guests who may have provided trade goods to individuals like Paleo, and others, for foods prepared in exchange.

Fish Stick: The original dried fish.  Large salmon were split, salted, dried in the sun, and kept to eat during the winter months when fresh fish were scarce.  Considered to be the true origin of the cliché of a ‘caveman’ clubbing and dragging a mate by the hair, dismissed by anthropologists by the damage that such a stone weapon would certainly inflict.  Evidence now suggests that the Fish Stick was used, in fact by both sexes in a playful mock battle, to woo and subdue prospective mates, and in hopes of conveying on a propective couple the salmon’s fertility.  The salt on the battered party was licked by the suitor, hence, ‘To lick your wounds’.  The tasty batons were then steeped in garlic mustard-infused Auroch milk, lightly warmed, and served by Mammoth-grease candlelight.

Tiger’s Egg: obviously not an egg, but an early type of haggis.  A section of Sabre Tooth Tiger’s stomach is scalded, and soaked in cold salted water; this is stuffed with a mince of the heart and lung of an Ibex lamb, the tiger’s favorite prey.  A dish considered to bring good fortune by honoring the tiger’s tastes in the afterlife; served with a tomato and garlic mustard gazpacho, memorializing the blood of both animals.

Barney: little is known of the main ingredient, other than it was basted on an open fire with a thick, prune and garlic mustard glaze, and served only to children.

Next Time: Restaurant reviews by Paleo, in the time before time began.