4 Reasons Why We Should Bring Back 1980s Hair 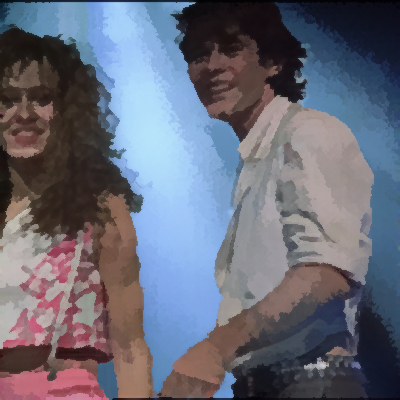 Whatever trends have come and gone in the world of style, women have not looked full-on 1980s of sexy for a long time. They look good, but not in that leonine, ratted, sprayed and covetable look like Prince’s band in Purple Rain.

Fast forward to this spring, which according to Glamour will be “laid-back, fuss-free mermaid waves. The more randomly placed and tousled the better!”  Oh, fun. And don’t forget that most important technique: ‘layering’!  While the gypsy shag is poking its nose into salons here and there lately, even these are layered. This homage to Reagan-era ‘big hair’ without teasing is great, if a girly Keith Richards is the look you’re after.

A retro thing is in the wind. Boy George has just released an album. Leggings are looming. Big, fat knots have returned to men’s ties, a look we’d thought we’d left behind back when Rocky and Adrian first met. If we have to look at those avocado-sized clumps of polyester under a man’s chin, then let’s bring back Big Hair, too.

Big Hair was informed by the 1960s bouffant. But instead of resolving the hanging sides with flips, it was left more au naturale, to the shoulder and often beyond. Here’s why it worked so well in the day:

It didn’t care if you were curly or straight, for all its volume, Big Hair pushed away from the edges, in respect for the features of the wearer.  It visited no conceit on a woman, it was inviting and obvious. For all the work it took, it complimented the face in a natural way.  No cocooning, pensive hoodies, troubled choppy pageboys, inaccessible geometric bobs, or Teutonic old world braids.  Just. Big. Hair.

2. 80s hair made everyone look good

It was The Hair of Possibilities.  Big Hair was the great equalizer: you didn’t notice if a person was maybe too thin or too heavy.  No one looked bad in 80s hair.  A person could backcomb and spray her way into a new class of friends or jumpstart her self-esteem.

Big Hair was all about bangs.  You love bangs, admit it.  Men love to look at them, and women love to have them.  80s bangs were always BIG.  No matter what the hair type, smooth and silky or curly, they were copious and massive.  A band of hot pink terry added a smoldering, sexy, aerobic look to the tease, highlighting those forehead curls.  Or the bow-tied ribbon, a look done to perfection by Madonna and Whitney Houston and those chicks in the Bangles.

I was never gay, but you could have fooled me during those whacky times.  Back then we were 30 years into rock and roll, an art form whose performers were recognized and characterized by distinctive coiffure, and music finally pronounced its own classification of groups who wore their hair big: the Hair Band.  The Crüe, Guns ‘n Roses, Def Leppard, Whitesnake, Poison.  Slap on a little blush and some Spandex, and some of these guys looked good enough to date. Dude don’t look like a lady, no matter what Steven Tyler says. That is all man, man.

Of course, the real reason 1980s hair is no longer with us is because it was a pain in the ass.  Yeah, and bangs themselves are an additional fuss, with the built-in buzzkill that once you have them, it takes forever to grow them out again.

Then, there was the upkeep. You could have maintained an in-ground pool with the amount of chemicals it took to give a woman (or lead singer) that lion’s mane. Those bills for salon time, gels, sprays and other ‘product’ could rival car payments.

Not to mention the effort: if you were cursed with fine, straight hair back then, you could not pass ‘Go’ and get right into ratting.  First, you had to get body.  Which meant gel, then juice-can rollers left side, right side, back and bangs.  Then dry. Now those starched ribbons could be teased wide and high, coaxed into place, and sprayed some more.

Okay, maybe Big Hair was a little of Chewbacca in a fright wig for peoples’ tastes today. It was a light, uncomplicated, happy time.  Some people miss it. And theirs, and other people’s hair.

Like Jim Morrison said: “Some of the worst mistakes in my life were haircuts.”