When Dogs Can Purr 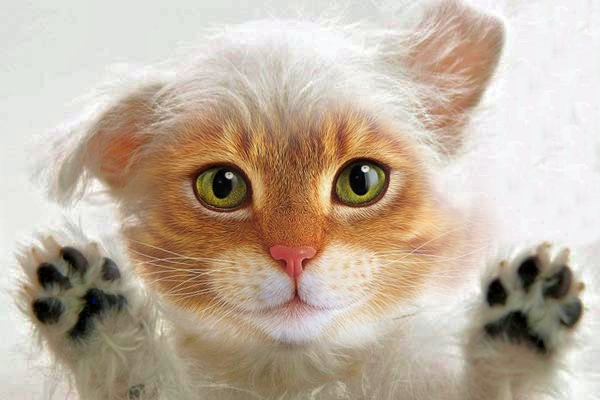 Scientists have isolated the gene that controls purring in cats, and are awaiting approval to transplant it into dogs.

They’re at work on the litter pan thing as well, but for now the headline is: dogs will have the whole package, the kneading, the dreamy-eyed stare, and the purr. That quality that endears cats to so many, with its known calming effects and engaging charm, a knack you’d be hard-pressed to find any human indifferent to. Add a low, steady thrumming to the soft, agreeable bulk of the Golden Retriever, and you have a whole new take of the concept of ‘cuddle’.

There will now be full employment, no strays, no need for shelters. All of these new pets, the species ‘Pet’, will appeal to all people, and will never be abandoned.

Why not get cats to bark? There are more than three times the number of dog breeds in the world, so they win. And, they are involved in many more commercially valuable activities. There are no bomb-sniffing cats that we know of, and they’re just useless around sheep. True, cats control the world’s rodent populations, but dogs are quick learners. Greater numbers of cat owners are single. And they tend to stay inside more. We need to get them up and out. And hitched.

Other mammals purr, guinea pigs, lemurs, gorillas, squirrels and raccoons, but none of these have the pet potential of a dog and a cat in one handy package. It’s not for lack of trying: dogs not only bark, they whimper, bay, whine, growl, and howl. They’ve got the pipes.

That doesn’t mean cats will be wiped out. All cats will be grandfathered (and grandmothered), to live out their lives in peace. Beyond that, they can continue on a voluntary basis, and of course, they’ll still be in Broadway musicals as long as those shows run. Cat-themed merchandise will continue to be sold.

Cats will not be gone as much as they’ll be assimilated. They’d be at one with the dog species, and dogs with them, in much the same way that the Neanderthals were assimilated into the modern human race, or how Teslas are now accepted for valet parking.

Cats would not be gone, as their qualities would now be in dogs, and both would be appreciated. There would be no need for separate water bowls. There would be just one aisle of pet food in the supermarket, freeing up space that could be used for a line of Prepper supplies and MRE’s. Or cat-themed merchandise.

A cat’s purr is known to be therapeutic for humans. Their owners can benefit from lower blood pressure and perceived stress, and less heart attacks. The sound is known to help mend broken bones. Put that in a dog, and wow: a pet that can retrieve game birds from chilly ponds, and make you feel good about dinner and yourself at the same time.

Dogs will come to like purring and adjust their behaviors to it. Dogs would bark less. Besides the expected reasons, to warn of danger for example, dogs also sometimes bark when seeking attention or during play, reasons that cats purr. Dogs would now have a new means to express their happiness, something cat owners prize felines for. Hence, cat owners would not miss them, and their affections can be easily transferred to the new Pet.

There would be no need for different news networks, just ‘PNN’. When dogs get the ability to purr and all pets are equal, there will be nothing to prevent the Pets from having a single convention every four years instead of two separate ones. Think of the money that would save. And because there would be only one favorite Pet of Pets, lobbyists would need new careers because there would be no market in influencing or advancing one species over another.

For the same reason, this would spell the end of the ‘super PET’, that pesky Political Effort Team. And with this new income equality, there’d be no first-class, and pets would be free to move about the cabin.

All Pets would share the same ancestry, and it would no longer make sense to claim forebears in places in Europe or Africa or Asia.

Pets would have nothing to kill or die for.

And no religion, too.

‘All cats kill mice’ is no better than ‘All dogs kill shoes’. This profiling will no longer serve a purpose, and will end.

And there will be no cat people. No dog people.