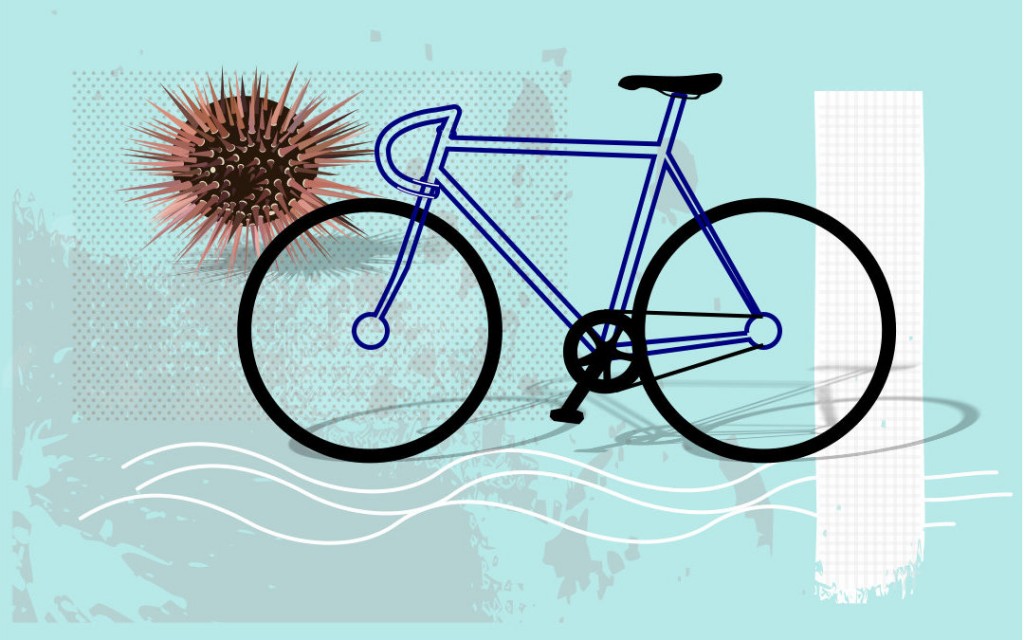 (First published in Marathon Literary Review – January 28, 2015, the ‘American English’ version. When I first wrote this, I was intrigued with the idea that it could have happened anywhere. So I wrote it again; this is the ‘South African’ version.)

When Willem wakes, he’s on his side, off the public path. The bike is in the middle, handlebars askew. It’s still but for a breeze rustling the fynbos. His eyes are heavy. He feels at home here in the sighs of old leaf and sweaty macadam and a spit of his own blood in his eyes.

Oom Willem from America held me up in his hands that day. The sea wanted us both. At one point he held me above the waves. He was running underwater and trying to catch the edge of the sandbar. He found it and we rose up. Like the resurrection.

Everything hurts. There’s weight on his neck. Here and there he tingles. His arm is under him, but he can’t move it. He thinks of the phone in his pocket, but can’t move his other arm to get it.

Willem’s helmet had split, one half blocks an eye. From the other, he makes out a shape in the undergrowth. The Adder had crawled in among the branches and dead leaves. He can’t see the head. Its body trembles slightly.

Oom Willem slipped off the sandbar and we went under again. His stubbly beard scraped my forehead raw. Later, he said it looked like I’d run into a sea urchin, a zeeëgel. We all laughed. Mother cried and shook and wouldn’t let him go.

Willem wants his phone, and water. This sudden, overpowering thirst: had he been bitten? He can’t feel his feet. In that last second he’d had sense, the snake, fat as an infant’s calf, curled up at the pedal, belly white, mouth wide, defying the abuse brought by Willem’s front wheel.

The Adder moves, a muscular, slow curl into a new position. Willem sees his phone, up against the Num-Num near the snake.

He hears the strum of wheels running up; a skateboarder kicks out just behind.

Willem’s calm. Like when his main ‘chute failed. Or when he hauled niece Bibi from the rip, spitting half the Indian Ocean up into his arms.

Next week, Oom Willem had a tattoo on his arm of a heart with a sea urchin, all glowing. And the date he saved me. Saved us. Both. We all laughed all over again. Oom Willem and Father turned the same funny red when they cried. I’ll love Oom Willem no matter what happened that day. And even when he calls me ‘kid’.

“Hey, sir,” a kid says, after too long and uncomfortable a silence.

All Willem can do is grunt. He can taste in his blood every scrape he had as a child, every misadventure on stairs, or football pitch, rope swing or pool deck.

The kid’s hands pat his pockets. Willem has yet to see his face. Now he doesn’t want to.

Willem looks at the phone. Behind, the snake moves, looking back, tongue flicking like a cartoon. He doubts the kid can see the Adder but he knows he now sees the phone.

The kid is above him, straddling. Holding the board by the wheels, he slowly coaxes the phone out from the bush with its nose. Amid its grunge graphics is cartoon sea life, airbrushed in graffiti style, a sea urchin included.

A woman from the van filling the path hands Willem his phone, and a bottle of water, “No, we didn’t see him coming in. Is he the one who called?”

The other EMS tech cuts away the rest of Willem’s t-shirt. The man has him move his arms, wiggle his toes. The man is methodical, determined. Will he ask Willem if he’s ever disappointed anyone? Doubted love? His own word? Does virtue have a toe he can wiggle?

“Sea urchin,” Willem is sure if he’s ever disappointed anyone, it was a misunderstanding.

And, he loves the kid.