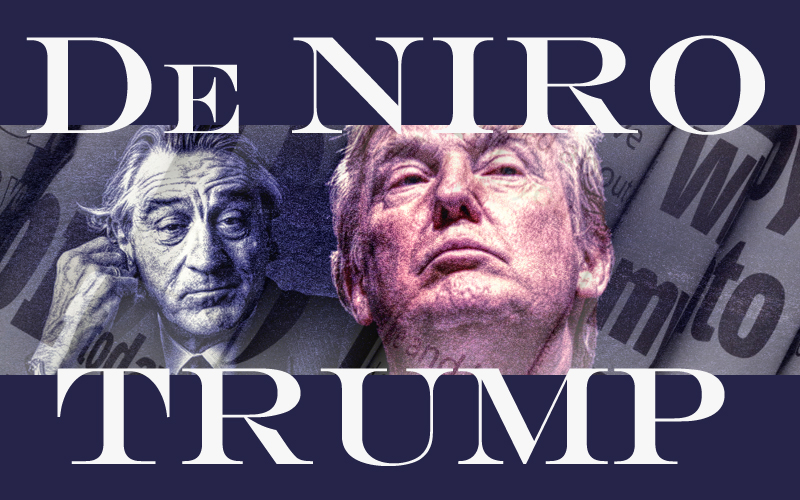 (From a interview of Donald Trump consisting of Robert De Niro’s on and off-screen quotes, held at the offices of The Tribeca Citizen in Lower Manhattan. First published in The Coffeelicious – December 4, 2016))

President: “Are you talking to me? The guy who wants to punch me in the face? Come on, gimme a break.”

DeNiro: “I can’t punch you now. You’re the President.”

President: “Big league! I’ve been wanting to ask, why the punch in the face? What got you going?”

DeNiro: “You didn’t wake a thing. You woke a person.”

President: “Right. Can I say Bobby? Is that okay? I know that some of your friends call you Bobby. Some would say you’re failing. A failing actor. Failing at it. At acting. Bobby is failing, some might say. I don’t think I would say it. Like seriously failing. Some would say you haven’t done a decent part since Raging Bull.”

President: “Failing big league. I wouldn’t say that about you. Not like this paper. The Tribeca is a failing paper.”

DeNiro: “I got these small hands. I got a little girl’s hands.”

President: “I’ve got big enough hands, quite frankly. Look at those hands, are they small hands? Not on your life.”

DeNiro: “Better to be king for a night than schmuck for a lifetime.”

DeNiro: “He knew the risks, he didn’t have to be there. It rains…you get wet.”

President: “O.K. Listen I have great respect for De Niro. Tremendous. It’s very special. Always has been very special. I think I’ve been treated very rough, extremely unfairly in a sense. I wouldn’t only complain about Bobby De Niro. I would say De Niro was about the roughest of all.”

DeNiro: “You have to think about one shot. One shot is what it’s all about. The deer has to be taken with one shot.”

President: “Ha! One of your lines that you said in…in…it was a good one! Whatever. Okay, but don’t forget that I’m in that business, too. Obviously. But that’s show business. And in some ways, it’s a crooked system. And it’s a rigged system in a lot of ways. It’s crooked. A rigged system. That’s acting. A lot of those people in it, some are very crooked. And it’s rigged.”

DeNiro: “The fear factor is always there–everything from losing tens of millions of dollars on a film that doesn’t work to not being able to get a good table in a top restaurant because your last movie flopped.”

President: “No fear, okay? You’ll always have a good seat, Bobby. Any one of my properties. Anytime. The brand is hot right now. It’s a terrific brand. Terrific. And we have always good seats. Always good seats for you.”

DeNiro: “When it comes to the arts, passion should always trump common sense. You aren’t just following dreams, you’re reaching for your destiny.”

DeNiro: “A good plan today is better than a perfect plan tomorrow.”

President: “I got a plan. It’s a fantastic plan. We want to bring the country together, because the country is very, very divided, and that’s one thing I did see, big league. Because our country’s really in bad, big trouble. We have a lot of trouble. A lot of problems. And one of the big problems, I talk about, divisiveness.”

DeNiro: “You don’t want to block the pain too much. Without the pain what would we talk about?”

President: “We could talk about the brand. The brand is doing terrific. I can’t help that. Hotter brand than it was before. I can’t help that, but I don’t care. It doesn’t matter. The only thing that matters to me is running our country.”

DeNiro: “You gotta be part gangster. You’ve got to fight for what you want. You’ve got to listen to everybody’s opinion, then finally at the end of the day, you have to do what you feel is right.”

President: “I know what’s right. I could run my business right. I could run the country right. At the same time. And there’s never been a case like this where somebody’s had, like, if you look at other people of wealth, they didn’t have this kind of asset, you know, the brand, and quite frankly it’s really, really hot right now. And this kind of wealth, and the many, many good properties quite frankly. It’s just a different thing.”

President: “It’s amazing how winning can change things. I didn’t need to do this. Why would I do this? But go to the Rust Belt. See what I saw. See how the politicians just cast these people aside. Good people. Terrific people. We have the best people. And we’re gonna be great again. Because I’m for the people. All the people. I stand by them. They’re my friends.”

DeNiro: “Never rat on your friends and always keep your mouth shut.”

DeNiro: “Look at the size of that trunk. You can put three bodies in there.”

President: “Yeah! I could do that too. Right on Fifth Avenue. And I wouldn’t lose any voters!”

President: “It’s one of the great movements of all time. It’s a phenomena.”