Nine Steins on the Matter of Light 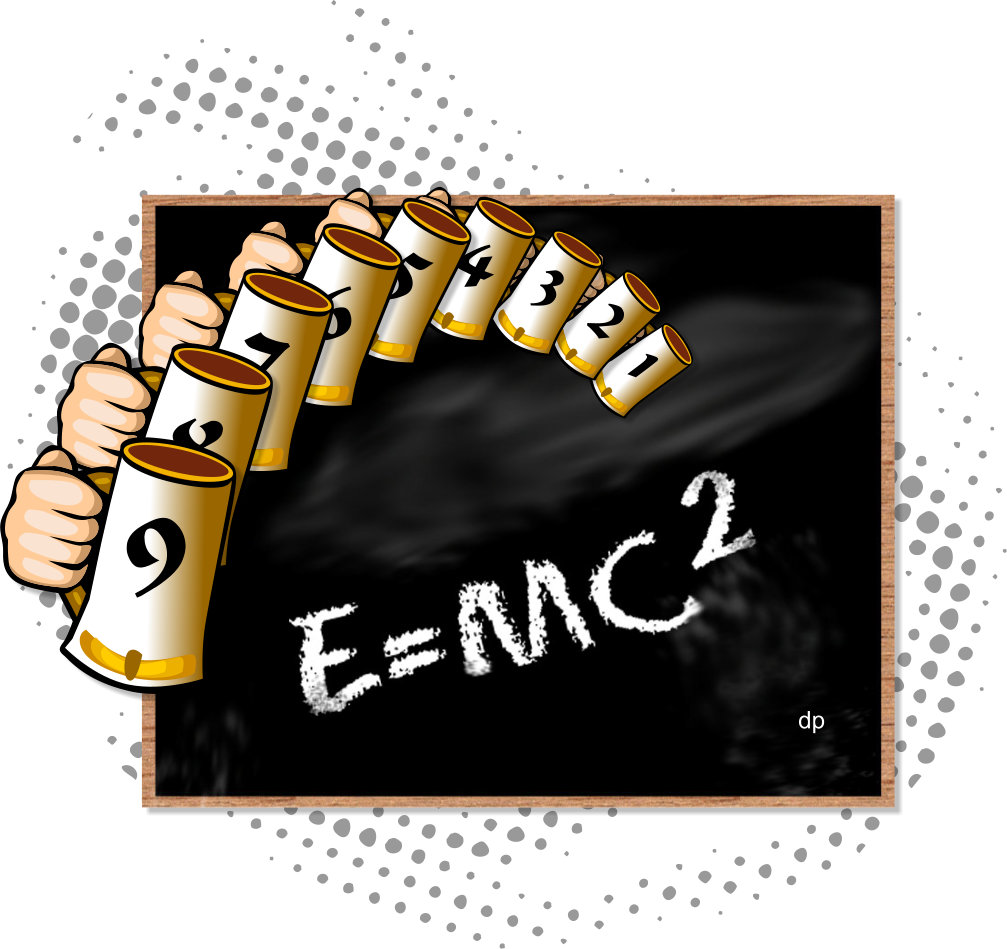 It began with ‘equivalence’, the idea made the atom bomb real. And probably the cell phone. But I hope not the Apple one. Just now does your science pronounce that matter can, after all, be created from the controlled collision of the photons in light!

So little time, and so many theories!  Having this time and space in eternity to re-evaluate many of my formulae after my brain was stolen, against my wishes upon death, and studied, and dissected, stored under a beer cooler like pickled eggs in brine, those photographs showing my corpus callosum’s prominence, but nothing about how the work that changed the world took a terrible toll on my family. The outrage of my brain’s kidnapping fueled a pure, synaptic energy in a corner of the time-space continuum sufficient to evolve what, to date, is nine of me. We are consecutively numbered, and named, auf Deutsch, natürlich!  We may start.

Zweistein: “Danke, Ein. I’m happy to begin. I propose American-style blue jeans can form from the gravitational pull of GPS coordinates and the square of that latitude-longitude. These pants would know where to take you, what places in your town, or country, or the world, suited to your interest and personality. One pair could easily locate another individual or like-minded group. These would be the pants that could safely get you home at night, regardless of your condition, and would instruct your washing machine to use ‘Fastest Clean’ or ‘Least Use of Water’.”

Dreistein: “I will prove that concrete block can be cast from the enthalpy of the collective sigh of 200,000 British fans at a Buddy Holly tribute concert during the first bar of ‘Not Fade Away’. These could be used to add a Rockabilly Pavilion to the UK Music Hall of Fame in London.”

Vierstein: “My work concludes that peace agreements can be formed from the sound energies of Broadway musicals of our day. A play is an entertainment on a human scale, and the experience enlarges all who attend it. Future treaties would be imbued with the spirit of Camelot, Brigadoon, Equus (not the Hyundai) West Side Story, Sweeney Todd, and Annie Get Your Gun, which would contribute the theme song to this new international harmony: ‘You Can’t Get a Man With a Gun’. Everyone would feel like a leading lady or man, and all seats Mezzanine Front.”

Fünfstein: “I submit that JELL-O can be made from the atoms in sackcloth and ash. An arrangement of molecules formed by the collision of the atoms extracted from this Biblical ensemble expressing subjection, and 4 cups water. Stir, place in the refrigerator for three hours. People like the gelatinous texture of the original dessert, and its sweetness. The reward of this new confection will be humility.”

Sechsstein: “Election ballots will be shown to form from the coefficient of friction of all the hands a candidate shakes while campaigning. What better way to get a campaign promises to ‘stick’ than to synthesize them from the faith that the electorate invests in those seeking their confidence?”

Siebenstein: “I have concluded that brownies could be successfully synthesized from colliding the atoms in bong smoke. What could be more convenient? And the resulting confection would be aroma-neutral, that is, undetectable by drug-sniffing dogs.”

Achtstein: “I’ve revealed Violin music from colliding the protons in the vapors wafting from a venti, non-fat, half-caff double latte extra-whip creme crown. This is more on the order of energy, sound energy that is, from the matter making up this beverage’s topping. The resulting strains would adjust their volume, tempo, and melodies to the mood of the moment and the surroundings, and would uplift and comfort.”

Neunstein: “I have proven that short story characters can be created from the Brownian Motion of the commingling aroma-clouds of Biryanis, Nethili Varuvals, Tandoori Chicken, and Rogan Josh simmering in the employee break rooms at Indian call centers. Perhaps no region on earth is more passionate about fiction than the subcontinent, and these characters would resonate in entirely new ways.”

“And have you a new theory, Albert?”

Einstein: I would prove that a titanium hip for my young Dollie could be formed of the square of the internal disorder of my regret times the mass of the azure photons in the gentian tiaras she wore in the meadows of Lake Como that spring before my vanity and ignorance drove our family into its downward arc. Can you forgive me, liebchen? More oyster for you in another life, Mileva! And less shell.