Since time began, mankind has sought to explain the events of the cosmos.  Comets were feared at first as evidence of an evil animus, then gained acceptance as one of the more benign interventions of extraterrestrial bodies as humans stitched these phenomena into their own mythology.  We ask now if maybe life here was an early passenger; always, humankind has sought to answer the question foremost when one enters our view, ‘What does it mean?’ 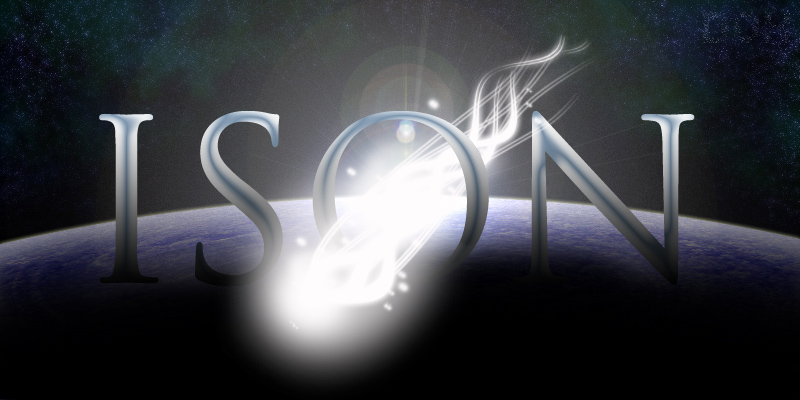 These transits are unique in that they’re celestial events that take days and weeks, and have appeared unexpectedly, unlike brief flashes from meteors, or the routine procession of sun, moon and stars. Every comet since time has witnessed mankind’s numbers, in the billions, gaping skyward in reverence, fear, loathing, awe, confusion, so seismic an upturning of human faces one could imagine that collective, worldwide motion wobbling our planet’s orbit on its own.

Today, we understand comets for what they are, conglomerations of ice and rock trailed by a vaporous tail, the product of the outgassing of elements from the effects of the sun.  More intriguing with respect to this latest cosmic visitor, is ‘What does that name mean?’

It’s called ‘ISON’.  In an age when celestial bodies are usually named with more scientific designations, usually a combination of discoverer and celestial co-ordinates, like ‘Montou 613b’ or ‘Beachwood 45789’, this one is called ‘ISON’.

That could be a series of games on Major League Baseball’s postseason schedule.  Like the ‘ALCS’.  And don’t forget the ‘ALDS’.  And that’s just the American league.  Could be.  But isn’t.

Actually, ISON does have a scientific designation, from the two Russians who discovered it,  Виталий Невский and Артём Новичонок.  So you can see why we call it ‘ISON’.

During its investigation, Drowning Book has discovered a rare manuscript from antiquity, which offered guidance on comet-naming.  It happens that ISON is not that unusual.  From the old texts, some possible combinations:

For convenience, we’ve created an ISON Translator, which was informed by some of these old texts, and to which we’ve added some of our own.  We provide it here in the hopes of helping you consider alternative translations.

Here are some astronomical terms, many of which you’ll be hearing on the nightly news the close the comet gets.  They all begin with the letter ‘O’ and hence qualify for a place in our ISON Translator, with an explanation for each:

Occultations: occurs when an apparently larger body passes in front of an apparently smaller one.  Like Snooki trying to block Governor Christie.

Oort: a theoretical spherical cloud of predominantly icy ‘planetesimals’ that lie roughly one light-year from the sun.  And here I thought it was a type of wart you get from oars.

Orbifolds: This has to do with string-theory, which to me suggests either something to do with music, or cheese.  Any astrophysicist reading this is pounding his or head on the table now.  Which makes two of us, because trying to come up with an explanation for this made my head hurt.  But it sounds so very cool.  Go ahead, say it(!)

Obliquity: As in ‘Obliquity of the ecliptic, the term used by astronomers for the inclination of Earth’s equator to the ecliptic.  Not to be confused with a popular desert of French origin, the eclair.  I mean, I’m just saying, the thought flashed through my mind, that is, “L’idée me traverse l’esprit comme un éclair”  (The idea crossed my mind like a flash).

Olber’s: As in ‘Olber’s Paradox’, a/k/a ‘the “dark night sky paradox“.  This is the argument that the darkness of the night sky conflicts with the assumption of an infinite and eternal static universe.  Or, why does all the light energy of the universe go away just because our puny little sun is on the other side of our earth for a few hours?  Whoa!  Who said pot was legal?

Oosterhoffs: Two populations of globular clusters in space discovered by Pieter Oosterhoff.  No, not the evolutionary theory that oysters waded ashore millions of years ago with the aid of their ‘oyster hoofs’.

Orgueils: components of the Orgueil Meteorite, which fell on the French town of that name in 1864, and which is often used to infer the relative proportions of elements in the solar system.  Started the debate about life from space because of the organic compounds found on its surface, but this was found to be pollen and grains from earthy contamination.

What to do when ISON arrives?

Stop punching the button on the Translator, above.  It’s now too late. 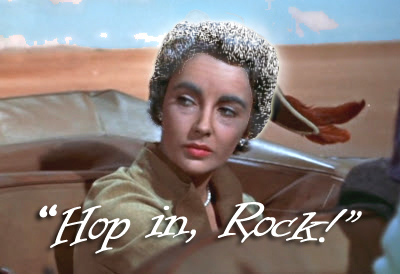 Proof that a comet buzzed the set of ‘Giant’

Go skinny dipping.  True, some heavily populated areas of the planet will have entered the winter months, but you can do this in a tub if you have too, as long as there’s a window nearby where you can get a peek at ISON, and more importantly, to give the cosmic debris a chance to enter your space.  But best would be to get some time outside, anywhere you can get a clear look at the night sky.  And for the sake of the Ancient Heavens, wear no hat.  Because there’s more than just the light show to elevate your being.  What can beat getting your skin treated to a sprinkling of dust from this century’s first Rock Star comet?  Consider what just a little inter-stellar sprinkling did for the career of one Hollywood star.