“I’ve never had a problem with being a Dummy,” Sean told the doctor. “Virgin Thermo. First mold. They can’t take that away from me.”

“Is someone trying to take that from you?”

“Not how I meant that. I’m grateful, in fact. At Lab this morning, they showed the final design. And part number!”

“How does that make you feel?”

“Wonderful. A part number is everything. It’s passed Engineering, and on to Fab. My weldplast is tomorrow morning, at eight. It’s real.”

“Guess how much they weigh.”

“Guess. They’re just boobs, after all.” Sean turned up from the couch, “Doctor, that’s a lovely rouge on you.” Sean settled back, proudly, “My ‘BAR-34B’ is three pounds, three ounces. And they nailed my Lead Tin Yellow.”

“I know that by adding the assembly I won’t be as-built. I’ll be the only Weldie in the group. But yes, I’m still very comfortable with my decision.”

Sean was designed as a frontal impact specialist, wired to measure head-on accelerations, impacts, shear forces and deflections picked up by sensors in her skin.

That was in the time when Uber and Lyft and taxi drivers had jobs, along with parking-lot attendants and tollbooth operators and traffic cops. That was the time before self-driving cars. Crash test dummies had jobs, too.

And after the accelerometers and transducers had been replaced with emotion sensors, Sean woke to feelings, and could sense happiness, surprise, sadness, disgust, fear, and anger. Eye-cameras were added along with facial expression recognition software.

In the process, Sean had skipped the childhood admonitions, the isolation and suffering, and found that in the catalog of human emotions and her reactions to them, she was not who she’d been molded to be.

He wanted to be a she.

Cars no longer crash, injuring or killing their occupants. Now there are emotional hazards. Some become docile from the passive experience of riding, some uncommunicative. Driving is no longer a process, with one person as pilot, an ad-hoc hierarchy with a common goal. Some people continue to ‘crash’ when self-driven, in ways unforeseen in the early days. The media now sensationalizes it, showing private cars disgorging catatonic children, dysfunctional prom dates, mature couples in argument.

Retrofitted with Artificial Intelligence, Sean was among those resurrected as the new crash testers, or ‘Agents’. Their legacy epicene form and school-bus complexion resonated with the public and lent credibility to the results of the tests in which they were now being used.

In place of Agent’s forms being hurled into dashboards and windshields, there were now slow-motion head bobs, expressions of comprehension from newly motive lips, cartoon eyes winking and the occasional thin, if plasticky, grin.

“And how do you feel about the other changes?” the doctor asked.

“Shrunk?” Sean twirled an index finger comically around her ear-dent.

Sean looked down at her hands. The slight delamination at the tips of her fingers had stopped its progress, thankfully. The techs advised her to watch for aggressive flaking. But this was the price for ‘frontal’ in her former life. Even a crash test dummy could be expected to shield its face now and then.

Now when she inhaled, breathing and a sense of smell new features in her redesign, there was the faintest hint of plasticizer, and a confluence of old mold-release and brittling resins.

Is this how it begins? Am I defleshing?

To survive years of crushing impacts, thousands of blows, only to waste away from inside. Just when she was learning to feel.

Maybe I’m human after all. 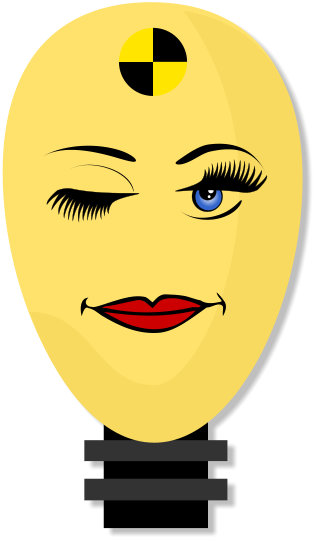 Sean would be the first Agent to have its sexuality changed. She would be the first in a new class: Hybrid VII 1st Female-Regen, though beyond breasts and slightly different proportions, there are no obvious differences between the Agent sexes. Their androgynous pubic mounds were the same smooth, featureless swelling more suggestive of upsized jockey shorts than evidence of gender.

“And how is that other thing going?”

“How’s that affecting you?”

“Not to dwell. It just hasn’t worked in out in that area. I don’t see why the expectation is that I should want to date. Men. Just yet, I mean.”

“I went out with the Michelin Man, Bibendum. Just once. He was high maintenance.”

“It was all about ‘Bib’. His pressure. His balance. How he might look on this or that rim. And he’d say ‘À votre santé’, to your health, to just about everything,” Sean looked to the ceiling, rolling her eyes, “And then there was Lex.”

“Tell me about Lex.”

“Lex was a Transformer. I’m transfender, so I thought there might be something there. And you might think that dating someone you could ride inside on a night out would be a great advantage. And at first, it was.”

“The problem with Lex was…he was never the same twice.”

“And the Pep Boys!” Sean moaned.

“Have I thanked you recently? For all you’ve done?”

Leaving the office, Sean got a message from Lab. Four Agents were needed next week to simulate two senior married couples, old friends, in a self-driving toy-hauler with two Harleys on board, riding from Texas to South Dakota. The couples were to celebrate their anniversaries together in Sturgis. The males were alpha, the wives were smarter than that, and for years, the four prided themselves on sharing the driving.

Agents were invited to volunteer.

‘DOB,’ Sean texted back with a flourish: ‘Dummy On Board”.