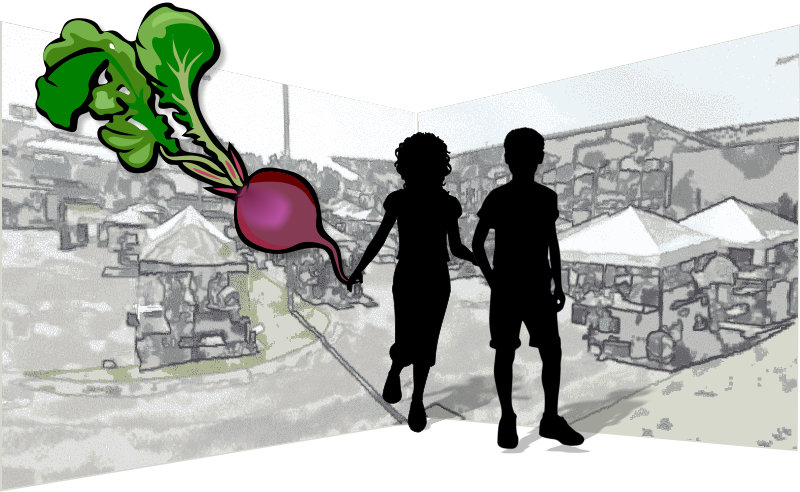 We never think too much of ourselves as being in ‘food service’, even after nine years with our own place. Certainly not carnies. Not even stationed alongside a repurposed midway, this early fall day’s smoky balms blending with the rumor of summer’s funnel cake and corn dog.

If only I could cook some sense into Brent. Prepare him another way. Less judgmental. More spice. A Brent reduction. Brent au jus. Infuse him with my fondness for scarves. A scarf on a man is so inviting. If it has to be camo, so be it.

I’m in ‘Side Dish’, with ‘Beets, Three Ways’. I chose beets because I knew no one else would. I was inspired by myths about the vegetable.

First: in some cultures, a woman and man will find their love eating from the same beetroot. For this, I created ‘Sweet Beet Confit’. Next, the beet’s reputation as a symbol for the human heart, its color and shape, inspired a cider-roasted ‘Still My Beeting Heart’. Finally, ‘Taking favors in the beetroot fields’ is an archaic expression for the oldest profession, hence ‘Beet Cheatin’ Boogie’, my take on a borscht stewed with beet greens.

The smoker is his, alone. My place is nowhere near it. In fact, we’d lugged along a small grill for me, lest the beets corrupt Brent’s shtick. But tomorrow is final judging. The smoker would have to make it through. We both know he could cite with precision the toll of BTU’s lost in that gasp of the lid’s opening, how much longer plating could be delayed the next day. My checking it was just nerves, a kitchen manager’s tic, we both knew.

I want him to feel his hand on my chin. The way he does before we kiss, just fingertips, softly. The way he holds the warm Flower Pot Rolls I make, studying them before each bite. I’d bake them next time with a pinch of my genes, so he’d know what it felt like to dread the laugh lines he wasn’t seeing in his mirror each morning.

The show was light duty, a kind of relaxation, an indulgence almost, though these are sooner or later gritty affairs, launching bawdy tsunamis of bedraggled Americana at us. We’d hold down our booth like a fort against fitful swells of grasping sample-seekers and hoarders, palates cocked to unappeasable tastes, kids shrieking against the twang of distant banjo, thumping bass and the Old Suwanee BBQ Shoot-Out and Muster staff’s tinny announcements.

Not ‘food service’. We prefer ‘hospitality’. And we love to compete. Not to mention that a prize paid big enough: even a 3rd place in the Main Event can sell out our walk-in coolers for a dozen Friday nights.

For a few years we’d brought along our own help, but lately we’re covering it ourselves, the prep and serving and cleanup. The staff back at our place loves to text encouragement. A party for them, with us three counties away.

Guys stop by our booth. Pitmasters, all. Brent invited them. They stumble into our space, wild-eyed gangsters after a few beers too many, and size me up. One or two, like they’re seeing a woman for the first time. A redhead at that. Those times only, Brent refers to me as ‘Goddess’.

The guys coo over Brent’s entry. They’re expected to mock mine.

“Nobody ever says ‘Can I have your beets?’” one says.

That’s when Brent pulls out three tent cards he’d secretly had made somewhere at the fairgrounds, with elegant copy hand-lettered on pretty peach vellum. The cards describe each of my dishes, in my own words. He puts each in place of the repurposed Old Suwanee “Hello” tags most folks were using.

After our visitors leave the booth, I palm Brent’s crotch, bothered that the gesture is succeeding only dully through the stiff apron cloth. Below the hem, one snakeskin beak of his new prized ‘show boots’ twitches like a rooster pecking the last dough from a bread-pan. He clucks, agreeably.

How perfect: he takes a plate of ‘Beet Cheatin’ Boogie’ all to himself and digs in. I dab the red juice from his chin. He reaches for mine and holds it with his fingertips, softly.

I’d taken a liking to the older couple in the booth across the way, cheery, blue-eyed bakers. Their entry was a crusty sourdough hearth loaf that looks and smells just heavenly.

Love is a bread made daily in a marriage, the older woman said earlier, as we exchanged samples. The dough, having risen once, must do it again. That’s the proof.

“Do it the same, and every day, and even though you’re sure it will, the bread never fails to surprise!”

“Like waking up with that good skin,” I said.

“Or someone who sees everything but,” she said.