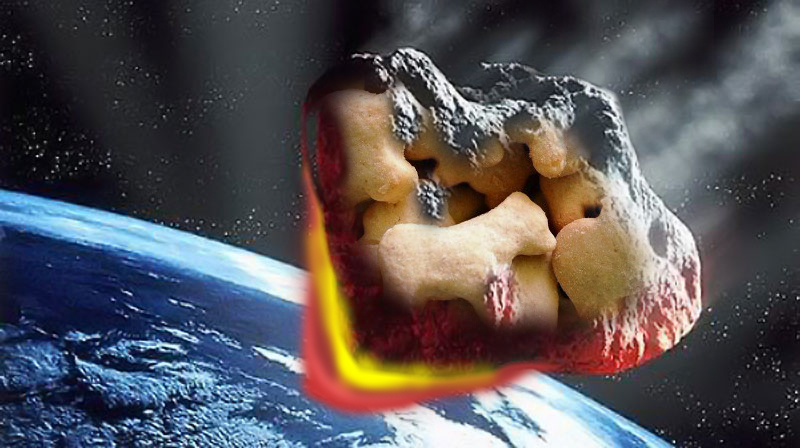 It’s now accepted that the building blocks of DNA and RNA arrived here via meteorites and comets. These are the origins of some of some familiar things around us:

Not a cracker, or cookie, but both. The only human food presented in the form of a menagerie. And sentient beings, at that. On their planet, these treats actually are the animals. Highly mobile, intelligent, and sociable. In 1894, the British cargo ship Sea Biscuit hit a rogue wave caused by a meteor’s impact with the sea, and the cargo of baked goods were ‘ruinously muddled’. The once plain, simple round ‘biscuits’ had been reformed into a curiously familiar menagerie, helped certainly by the Crackerians’ shape-shifting powers. They were auctioned to a travelling circus for use as animal fodder. They never made it to the feed-trough. Instead, PT Barnum boxed them up, and ‘Animal Crackers’ were born.

The products Mays pitched were inspired by lifeforms from the planet that bears his name. On Planet Billy Mays we find:

OxyClean® – The air they breathe, and the water they drink.

Hercules Hook® – A gravity-defying lifeform used in transportation there.

Jupiter Jack® – A rapper who migrated to Billy Mays. From Jupiter.

Kaboom!® – An intelligent, living cleanser created by the sonic booms of the re-entry of Billy Maysian spaceships.

The meat paste of this cold cut is the planet’s atmosphere, and the olives in suspension are its dominant lifeform. Two, actually: the olive and its inner ‘stuffing’, two creatures in a symbiotic relationship. The olive provides locomotion and protection from predators and depressive anxiety, the pimento a rationalist Weltanschauung and command of the planet’s wines and pairings. 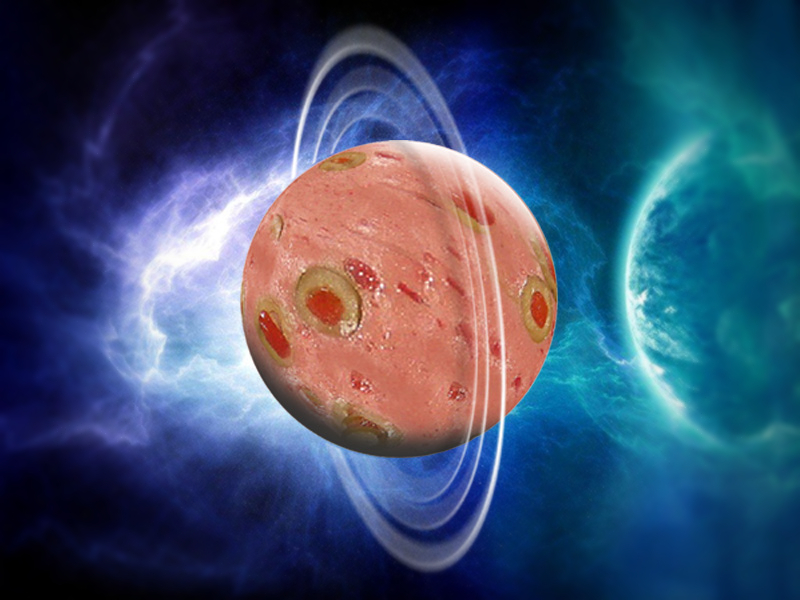 It happens that the distinctive rings around Olive Loaf are a gaseous form of Chianti, the source of perhaps the most alien vintage ever produced on Earth: red grapes left in drawers in caves until a white mold forms, then pressed. Now, if Planet Olive Loaf had only contributed the source for Ciabatta bread, that planet alone could explain the origins of an entire luncheon. But Ciabatta bread from space? That’s a stretch. Focaccia…maybe.

It’s not about Elvis’ monumental effect on music, his catalog, his style, or his fame. It’s about his reproductive capability. When he got big, it wasn’t water weight, or too many Fluffernutters. Elvis was reproducing, actually calving. And he never really left us: there are now 85,000 confirmed ‘Elvi’ worldwide. Up from a mere 170 when he died. At that rate, within a generation, 1 of every 3 people on Earth will be an Elvis. What better way to kick-start world domination?

The mammals that survived in the margins of the Age of Dinosaurs bore and nursed their young, but who taught them that? Yes, the dinos were killed off by a meteor we now know was the same one that delivered the Lifetime gene sequence to earth. A lot of dust kicked up, it got very cold. The smaller, nimble mammals, in touch with their feelings from the new programming offered by the Channel, knit sweaters for the dinos, but the big beasts could not handle the range of emotions running amok on the planet’s surface, preferring to shiver in the dark instead of accepting gifts, and died in droves.

This planet has contributed the only earthly occupation that ascribes ‘Super’ to its top-performers. There are no ‘Superdrivers’ in NASCAR. No ‘Supercomedians’ in standup. No ‘Superplayers’ in the NFL. Not even in the Super Bowl. It’s been said that there are over 7 billion people in the world, but only 8 that look like supermodels. There is Superman, and we know where he came from. Here are some actual quotations that suggest these model citizens too, have connections to other realms:

Cindy: ‘Even I don’t wake up looking like Cindy Crawford.’

Kate: ‘Nothing tastes as good as skinny feels.’

Gisele: ‘I’m a huge fan of big cotton underpants. I wear them every day.’

(Graphics by the Author)