A series that accompanies the poems The Flag by Pui Ying Wong, Fox on Greenway Lane by Al Ortolani, and E Pluribus Unum by Kim Roberts in Issue #27 of Up the Staircase Quarterly. 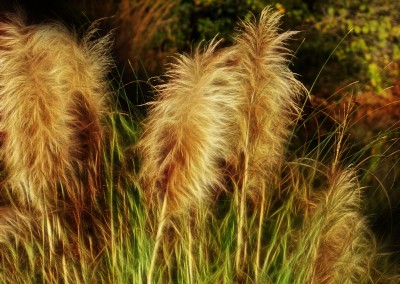 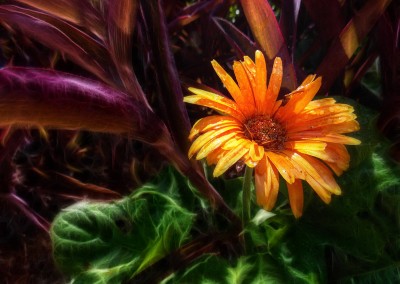 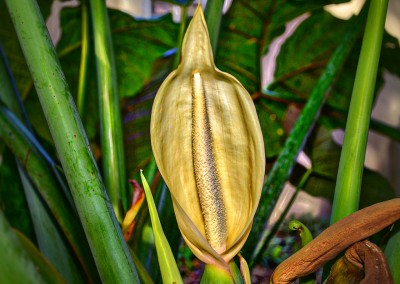 These were taken in our yard in Green Cove Spring, Florida…

Aster is one of several Gerber Daisies (Gerbera jamesonii) growing in a bed of Purple Heart (Tradescantia pallida) alongside a patio; this shot took getting low and close, and I shot it laying down on the wet stone between cloudbursts one afternoon. By the next day, the blossom had expired and withered, claimed by the pitiless July sun.

Pampas is a pond-side stand of Cortaderia selloana that catches brilliant light early in the morning, and late afternoons. Some of the tussocks are on stalks over seven feet tall. I wanted both the flowery ‘panicles’ and a sense of depth, so I shot this ‘tele-macro’ from a distance, braced against a tree-trunk, to get both the tussock tops and the other shore of the pond. In late winter, the panicles are richer in browns, which is when this was taken.

Elephant-Ear is the blossom of the Colocasia esculenta, this clump having leaves the size of ottomans, on stalks as high as six feet. This blossom is over a foot tall, and I had to stand under the canopy of leaves to get it. It was Christmas Day, 2013, and though it was a warm, sunny morning when I took this, hard frost was looming in the forecast. Within a few days, the entire ‘stand’ had shriveled and collapsed from the cold.